The article describes the etiologic role of various factors such as chronic rheumatic heart disease, bacterial endocarditis, aortic valve stenosis, hypertension, coronary heart disease, including acute myocardial infarction, degenerative disease of the valves, connective tissue diseases, chest trauma, sys-temic lupus erythematosus, con-genital heart disease which leading to the mitral valve chords rupture, gives the current classification of the nosology and also features of manifestation and clinical course. The authors also described a clinical case of mitral valve posterior leaflet chord rupture in the patient with hypertension, ischemic heart disease and chronic obstructive pulmonary disease, which reflects all the stages of diagnostic search and the difficulties encountered in making the diagnosis. There were analyzed the basic concepts of medical and surgical treatment, features the choice of treatment strategy depending on the degree of mitral valve insufficiency

The rupture of the chordae tendineae of the mitral valve was first described by Corvisart in 1806 in patient with endocarditis. Since that time, there have been described many cases of chords ruptures and related to it severe mitral regurgitation and progression of heart failure [9]. Chordal rupture complicate chronic rheumatic valvular disease (mostly during the chronic stage) [1, 6], bacterial endocarditis on both normal and rheumatic valves [2, 6], degenerative mitral valve disease, ischemic heart disease, acute myocardial infarction, non-mitral heart and valvular abnormalities (such as aortic stenosis and aortic regurgitation), it may be in patients with  systolic hypertension [5, 8], systemic or generalized connective tissue abnormality (Marfan's and the Ehlers-Danlos syndromes, osteogenesis imperfect), after blunt chest trauma or surgery [12], in patient with systemic lupus erythematosus, congenital heart disease, hypertrophic obstructive cardiomyopathy [11], systolic click-late systolic murmur (mitral valve prolapse) syndrome and in association with pregnancy. Acute mitral regurgitation resulting from rupture of chordae tendineae has also been reported in those who engage in vigorous exercises [3] (Table 1). 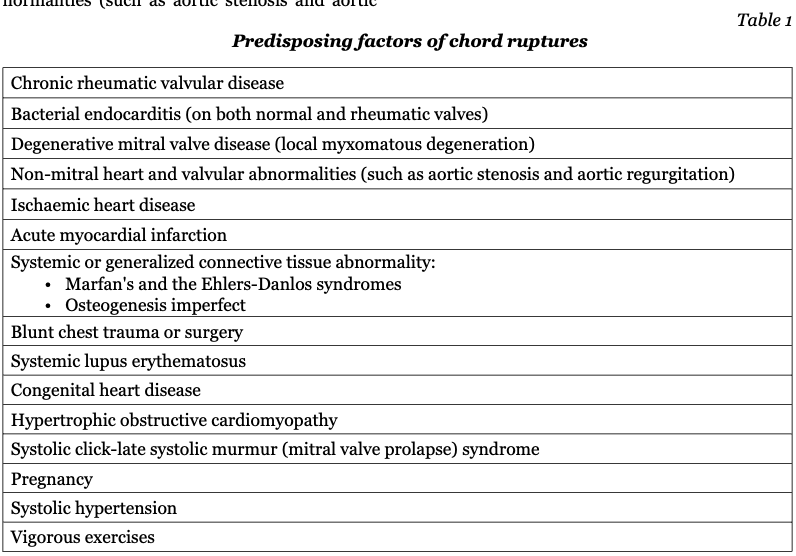 Thus, the rupture of the chordae tendineae can be spontaneous (without causes) and secondary. Patients with spontaneous rupture are predominately among men older than 50 years, rarely young adults and children [8]. The etiological basis of spontaneous chordal rupture is still unclear, but it probably results from abnormalities of collagen synthesis and degradation. The isolated posterior rupture of the mitral valve occur more frequently than the anterior one. There is a higher incidence of spontaneous ruptured chordae of the posterior leaflet. Rarely, ischemic heart disease is associated with chordal rupture. Acute myocardial infarction results in papillary muscle dysfunction, less frequently, papillary muscle rupture. The papillary muscles are supplied by end arteries. Chordae tendineae are avascular structures, although in the normal mitral valve a small proportion of chordae show a muscle core throughout their length. The most common impaired site in patients with rheumatic mitral valve disease is the anterior leaflet. The most common site of spontaneous chordae rupture is the posterior leaflet [4]. However, the mechanism of such a difference remains unclear.

Mild/moderate mitral regurgitation/heart failure is usually caused by chordae rupture, which involves separation of a single chorda that leads to minimal hemodynamic effect and requires neither intervention nor treatment. Severe mitral regurgitation/heart failure is usually caused by a rupture which involves multiple chords simultaneously and may cause severe acute mitral insufficiency, a life-threatening emergency requiring immediate surgical intervention. But some case-reports exhibited evidence that severe rupture may be either an immediate onset or a progressive process in which the minimal rupture precedes more extensive or even complete rupture. 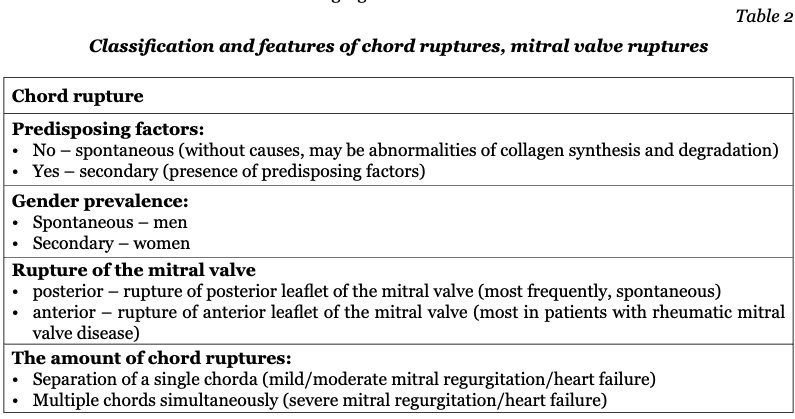 According to the systematic review of Uri Gabbay and Chaim Yosefy «The underlying causes of chordae tendinae rupture», in which they analyzed 1390 cases of chordae tendinae rupture (CTR) before and since 1985 and till 2009 [4, 113-118]. Chordae tendinae rupture overall rates before and since 1985 remain considerable (52.5% vs. 51.2%), yet median decreased (35% and 14%). Sub-acute endocarditis and rheumatic heart disease were the most frequent causes before 1985 (54.4% and 42.1%, respectively); since 1985 sub-acute endocarditis and rheumatic heart disease have dropped sharply to 37.4% and 24.8%, respectively. Since 1985, mitral valve prolapse and myxomatous degeneration have caused 44.5% and 11.7% of cases, respectively. All other causes were almost not evident.

The impairment of any component (annulus, leaflets, chordae tendineae, and papillary muscle) of the mitral valve may result in mitral valve incompetence. Carpentier and colleagues classified mitral valve incompetence into three types [7, 190]. In type II, the free edge of one or both leaflets overrides the plane of the annulus during systole. Type II lesions are related to excess leaflet tissue, elongated or ruptured chordae, dysfunction or ruptured papillary muscle. Types I and III may be associated with type II. In type I, the free edges of the leaflets remain below the plane of the annulus during systole and open normally during diastole. Mitral regurgitation is related to annular dilation or leaflet perforation. In type III, one or both leaflets do not open fully during diastole. Mitral regurgitation is related to restriction of leaflet motion of rheumatic or ischemic origin. Carpentier and colleagues in France and Duran and associates in Spain have both proposed nomenclatures of the mitral valve. The valve is divided into two leaflets, posterior and anterior. The posterior leaflet is further divided into three scallops, P1, P2, and P3, which are anatomically evident. P1 is adjacent to the anterolateral commissure, close to the left atrial appendage. P3 is adjacent to the posteromedial commissure. The anterior leaflet is also divided into three scallops, A1, A2, and A3 facing the corresponding scallops of the posterior leaflet. P2 prolapse is the most frequent abnormality. The two nomenclatures are shown in figure 1. 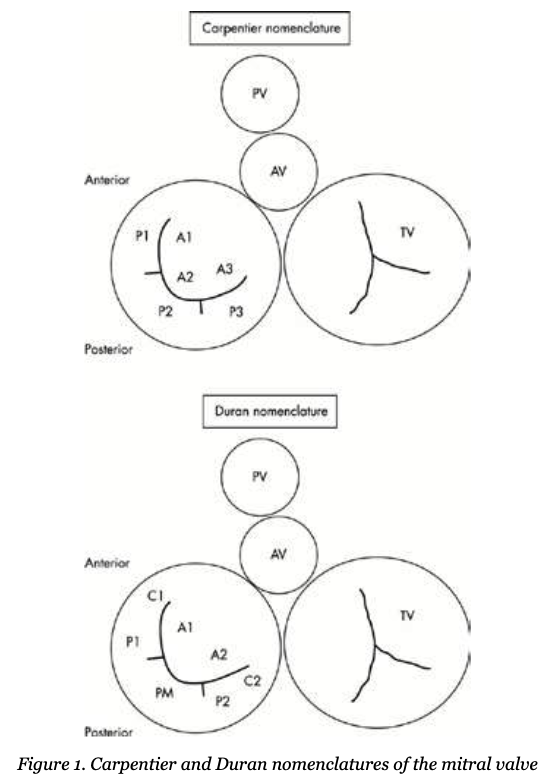 In the Duran nomenclature, the three scallops of the posterior leaflet are named P1, PM (middle), and P2. The anterior leaflet has only two scallops A1 and A2. The Carpentier nomenclature is described in the text. AV, aortic valve; PV, pulmonic valve; TV, tricuspid valve.

A 76-year-old woman was admitted with dyspnea, lower limbs edema and fever during the previous several days. She noted a sharp appearance of sudden dyspnea a week before. In the district hospital, the chest X-ray was done and bilateral lower lobe pneumonia was revealed. There wasn’t any significant positive treatment outcome. Thus, heart failure was regarded the leading cause of the disease, and the patient was referred to the cardiology department. Over the past 20 years, the patient suffered from arterial hypertension and regularly took antihypertensive drugs. She had a 30 years history of work with paint materials. Upon admission, she had attenuation of the percussion sound in the basal parts of the lungs. Pulmonary auscultation revealed hard breathing, dry wheezing. Also the left heart boundaries expanding, systolic murmur at all points of auscultation, mainly in the area of the projection of the mitral valve, which is held in the left axillary region, edema of the limbs were registered.

Description of the problem, procedures, techniques and/or equipment used

Mitral chordae tendinae rupture is a rare but important cause of severe mitral valve insufficiency and left ventricular dysfunction in patients with degenerative mitral valve disease.

The electrocardiogram showed sinus rhythm, left ventricular hypertrophy with no signs of ischemia. 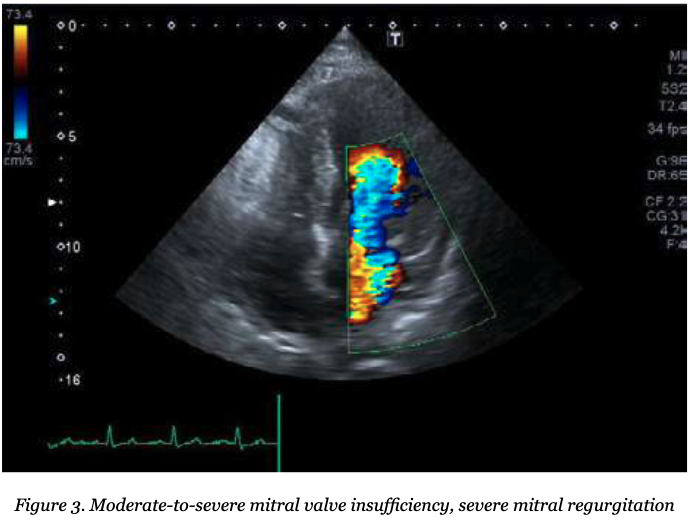 Angiography showed 40% stenosis of the proximal left anterior descending artery and 40% stenosis of the proximal segment of the right coronary artery. Multidetector computed tomography with angiography of the pulmonary arteries revealed the presence of cardiomegaly, pulmonary arterial hypertension and moderate bilateral hydrothorax. Convincing evidence for pulmonary embolism at the time of the study hasn’t been identified (figure 4).

The patient had aortic stenosis, but it was slightly expressed and could not cause a substantial heart chamber enlargement, severe left ventricular failure, dyspnea, double-sided hydrothorax, double-sided congestive pneumonia. In addition, there were particular auscultation pictures – systolic murmur mainly in the mitral valve with the left axilla irradiation. The presence of the patient heart chamber dilatation because of ischemic cardiomyopathy was excluded during coronary angiography – no severe and hemodynamically significant coronary artery lesions were revealed.

The diagnosis of acute chord rupture of the mitral valve posterior leaflet is usually difficult to quickly establish in patients with left ventricular dysfunction and requires very careful differential diagnosis especially in old-patients with co-morbidities.

Repair procedures are based on quadrangular resection of the posterior leaflet, ring fixation of the mitral annulus, chordae transfer, sliding leaflet technique, and commissuroplasty. These techniques are often combined. Chordae tendineae rupture can be repaired by reconstructing or replacing the chordae tendinae with or without annuloplasty, which is associated with better outcome, lower mortality, lower morbidity, and better quality of life in comparison with mitral valve replacement.

Patients with chronic non-ischemic severe mitral regurgitation who have NYHA functional class I symptoms and who have normal LV ejection fraction > 60% and LV end systolic diameter < 45 mm may be followed up medically at 3–6 month intervals. If such patients develop evidence of LV dysfunction, atrial fibrillation, or pulmonary hypertension (estimated pulmonary artery pressure of 50 mm Hg at rest or 60 mm Hg during exercise), the patient should be considered for cardiac catheterization and possible mitral valve surgery, particularly if it is thought that the mitral valve can be repaired.  Patients who have chronic non-ischemic severe mitral regurgitation who have class II, III, or IV symptoms should be considered for mitral valve surgery whether or not the LV function is normal (LV ejection fraction > 60%, LV end systolic diameter < 45 mm). Whenever possible, mitral valve repair should be performed. Conversely, patients with severe symptoms and severely depressed LV function (LV ejection fraction < 30%) are generally best treated medically.

Conclusions and implications for clinical practice