Due to excessive use, synthetic medicines are going to be expensive and resistant, their residues accumulate in blood, that is why slowly and gradually they become resistant. Alternatives to synthetic medicines are herbal medicines that are cheap, with minimum or no side effect. Previous studies found that liquid extract of Aloe vera plant proved beneficial for animal’s health as it has immune-modulating, hypolipidemic, hypoglycemic and haematinic effects. The aim of this study was to investigate the effect of A. vera extract on plasma biochemistry. A total of twenty (n = 20) male rabbits were selected and divided into 4 groups; P, Q, R and S with five (n = 5) in each group. The group P was kept as control while group Q, R and S were given oral A. vera extract at the dose of 200, 300 and 400 mg/kg body weight, respectively daily for 21 days. Blood samples were taken on various days; 0, 7, 14 and 21 of treatment. Research has found that A. vera significantly (p < 0.05) decrease cholesterol level, that is indication that A. vera has influence on adipose tissues.

Herbal treatment has been used from ancient times for the remedies of many pathological lesions and pathologies. There are many plants with medicinal characteristics; Trigonella foenum graecum, Allium sativum, Gymneema slyvestre, Syzigium cumini and Aloe vera (Saif-ur-rehman et al., 2011). A. vera is a well know plant that has been grown in houses as first aid in many countries. It has been reported that there are 275 species of A. vera, out of that, 100 occur in South Africa (Maphosa et al., 2010), 4 occur in india that are Aloe ferox, Aloe inermis, Aloe forbesii and Aloe barbadensis and 12 to 15 occur in Arabian Peninsula (Urvashi et al., 2012). A. vera is a succulent plant that is mainly composed of inner liquid portion and outer greenish covering that has small spines. The former is about 99.5% and the latter is about 0.5% that constitutes the whole solid portion (Josias, 2008).

Research has investigated that there are about 200 compounds in A. vera out of them, 75 are well known for their biological active ingredients. These active ingredients are aloe polysaccharides (Jun et al., 2005), cholesterol reducing ingedients (anthraquinones, isoAloeresin-D, iso-rabaichromone, neoAloesin-A) (Ni and Tizard, 2004) tannins, sterols (lupeol, Aloetinic acid, choline and choline salicylate, complex mucopolysaccharides similar to hyaluronic acid, sapogenins), enzymes such as catalase, alliinase, amylase and cellulose. A. vera gel contains anthrones and anthraquinones acetylated mannans, anthraquinone C-glycosides, polymannans and lectins (Boudreau and Beland, 2006).

It has been reported that A. vera has been used for remedies of many non infectious infestations such as enhance wound healing by proliferation of epithelial and fibrous tissue (Reddy et al., 2011). It has been used to prevent and treat various lesions of gastro intestinal parasites mainly helminths (Maphosa and Masika, 2010). Research has investigated that A. vera has influence on central nervious system and enhancing ependymal cells of brain that are source of cerebro spinal fluid in cavaties called ventricles (Rengin et al., 2008). A. vera promote the function of liver and pancreas by enhancing aspartate amino transferase (AST) and alanine transferase (ALT) that have been investigated as hepato-specific enzymes and cause major damage to hepatocytes (Iji et al., 2010).

It has been investigated that A. vera has antifungal properties and used to prevent many fungal infestations and fungal diseases. Instead of this, A. vera has been used as preventive measure as well as to treat variety of infectious disease. It has been used as an active anti bacterial agent against bacteria such as Klebsella, Pseudomonas, Streptococcus, Staphylococcus, Escherichia coli, Salmonilla etc (Josias, 2008). Research has investigated that the vital medicinal A. vera plant has been used for remedies of various viral diseases. It has been used to prevent animal and humans from hepatitis by enhancing function of liver and inhabiting hepatitis virus (Rabe et al., 2005). It has also been used to enhance immune system; mannose polymers are special polysaccharides derived from A. vera with immune modulating properties (leung et al., 2004). It has also been investigated that aloe polysaccharides are used to stimulate hematopoietic stem cell, myeloid and erythroid colony forming cell and macrophage colony forming cell (lm et al., 2005). Considering its hypoglycaemic effect, A. vera has been used to cure diabetic as well as normal rats (Saif-ur-Rehman et al., 2011). By considering clinical and therapeutic importance of A. vera, the present study is proposed to know safe and effective dose of A. vera extract; and also to know its biochemical and haematological properties.

A. vera plant was brought from Hyderabad district of Sindh province, fresh leaves of A. vera was separated and washed. A leaf was splitted in two parts by removing spiny margins, white transparent inner gel of A. vera was obtained, blended and weighed. Two hundred grams (200 g) of blended A. vera liquid was boiled with 400 ml of distilled water for 20 min. After boiling, the extract was cooled, filtered and stored in a refrigerator (4°C) until further use. A total of 20 male rabbits (average body weight: 1·5 kg) were selected and divided into four groups; P, Q, R and S (with 5 rabbits in each group). Feed (rice and green grass) and water was given to them according to free choice of feeding. Group P was kept as control while group Q, R and S were given oral A. vera extract at the dose of 200, 300 and 400 mg/kg body weight, respectively daily for 21 days. Blood was collected (on 0, 7, 14, and 21st day) of treatment from central ear vein and cephalic vein, and transferred to test tubes containing anticoagulant (EDTA: Ethylene diamine tetra acetate). The blood samples were brought to Post Graduate Laboratory of Veterinary Physiology, Sindh Agriculture University, Tandojam for analysis and further investigations. Serum protein, globulin, albumin, urea and creatinine were investigated according to Ogunsanmi et al. (1994). The plasma triglyceride and cholesterol were determined according to Toro and Ackermann (1975). 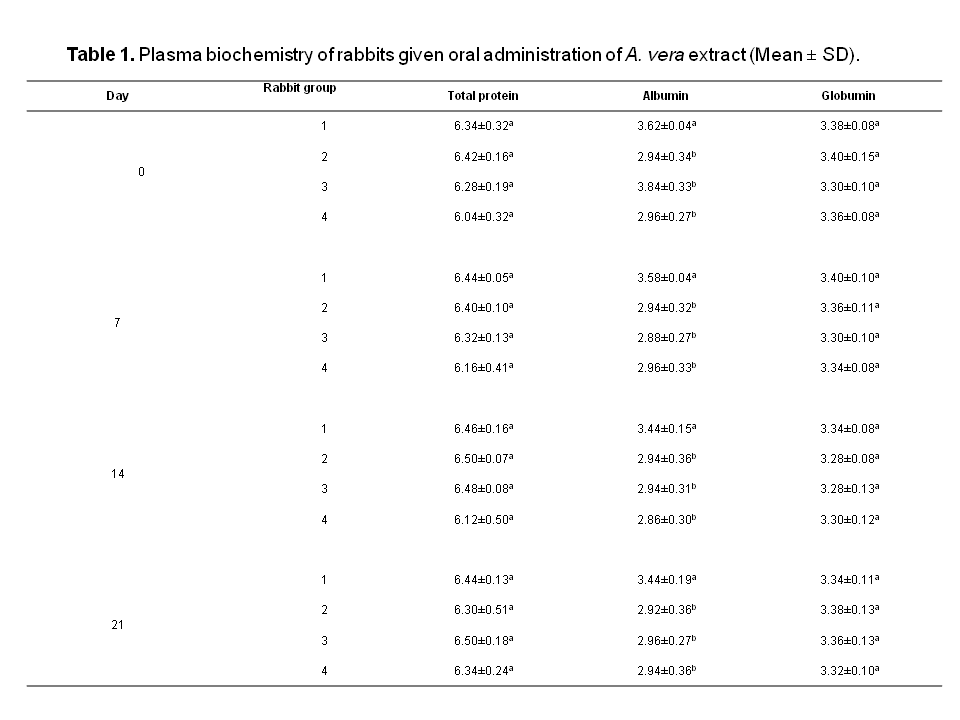 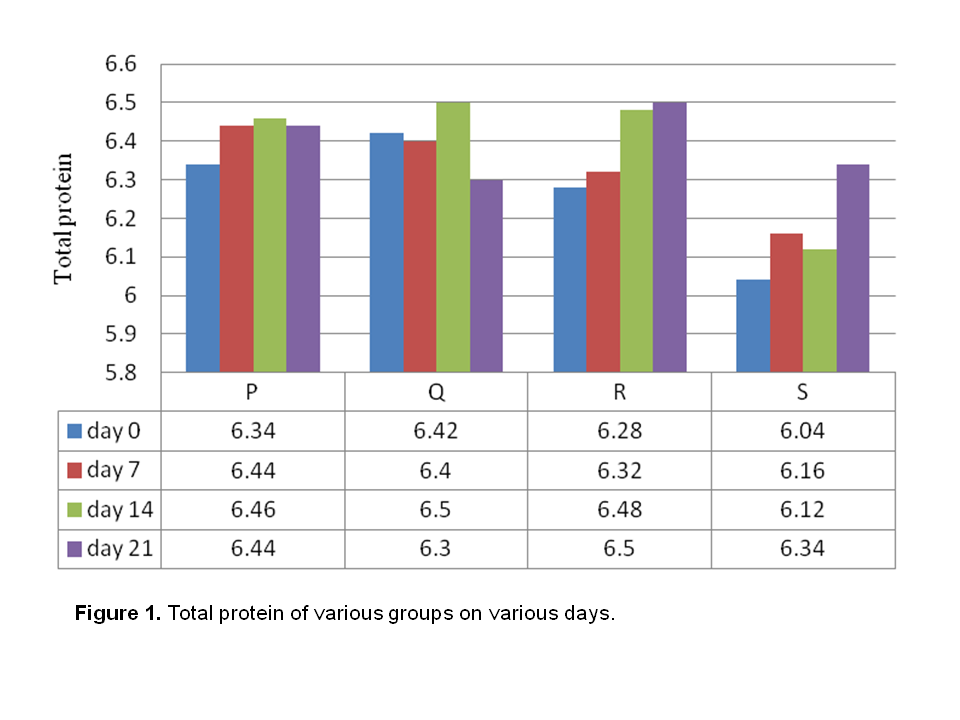 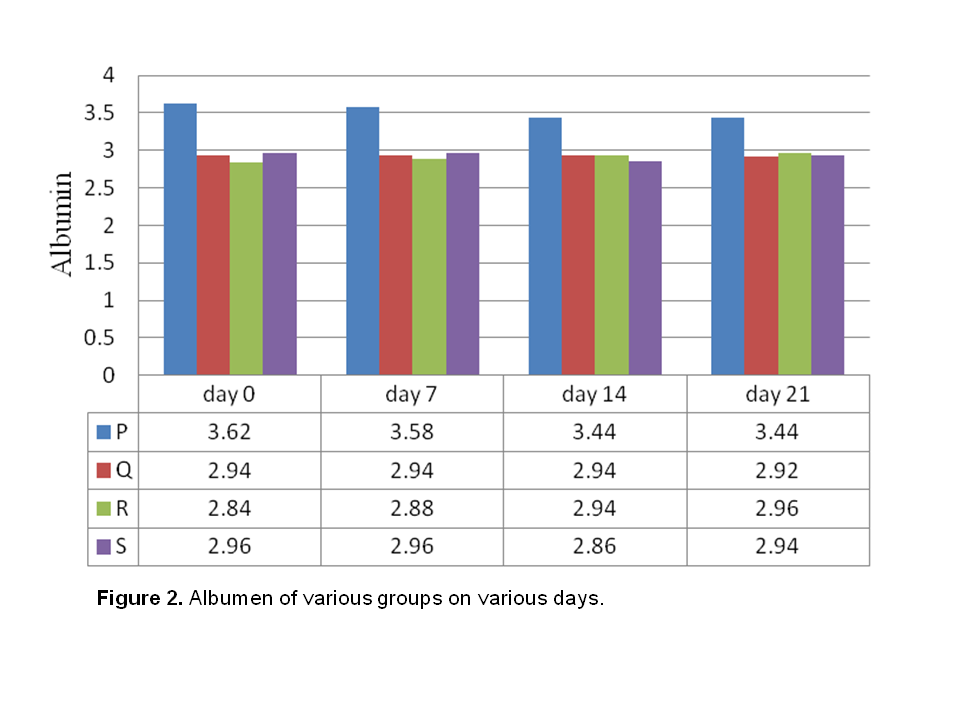 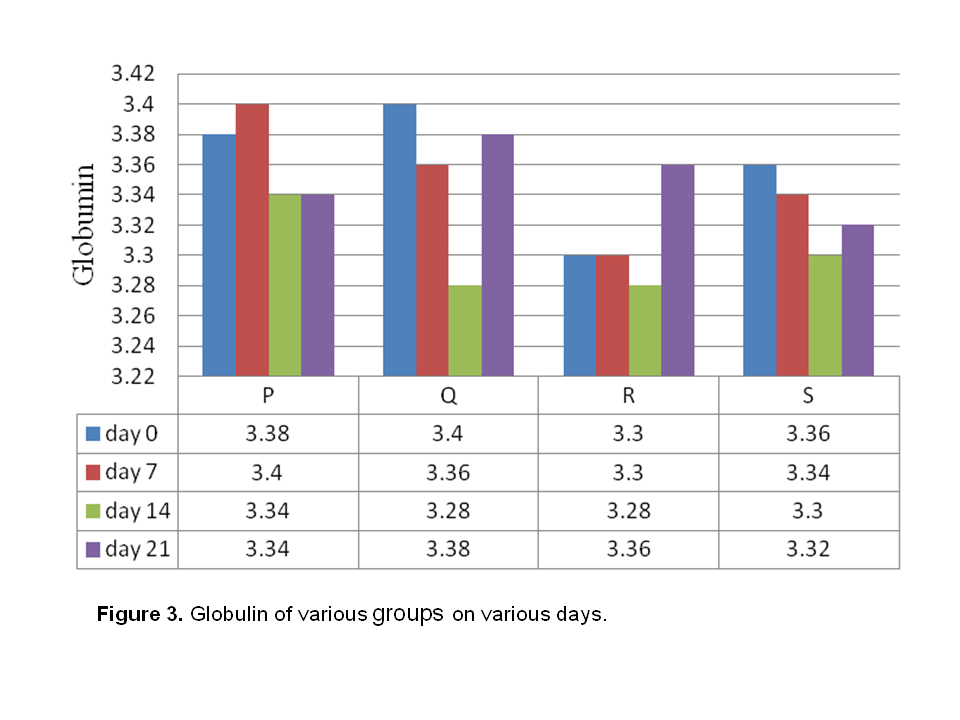 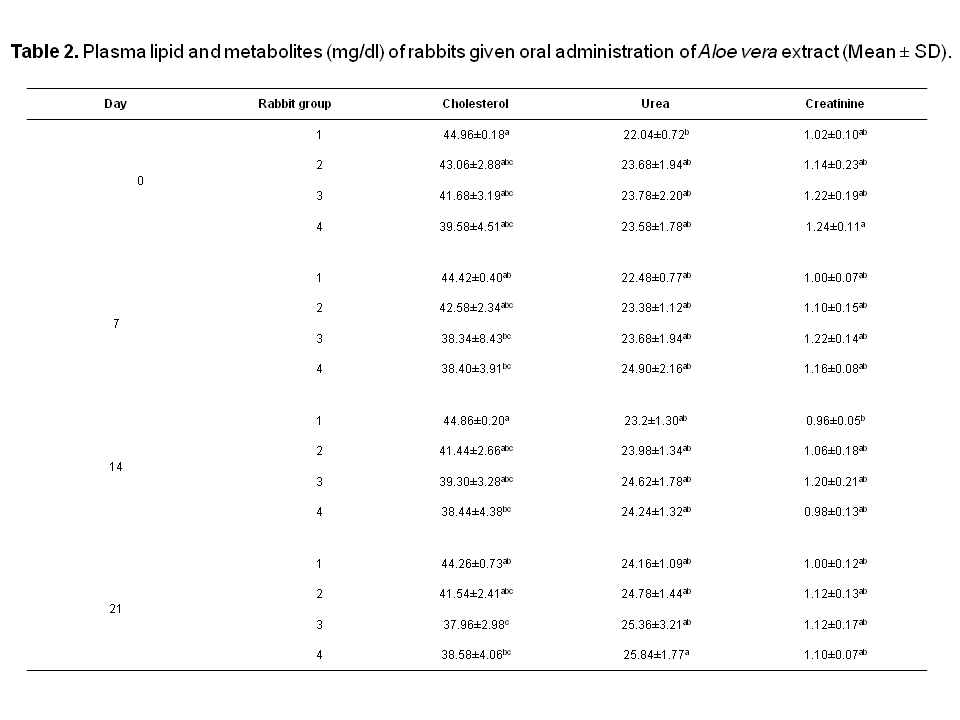 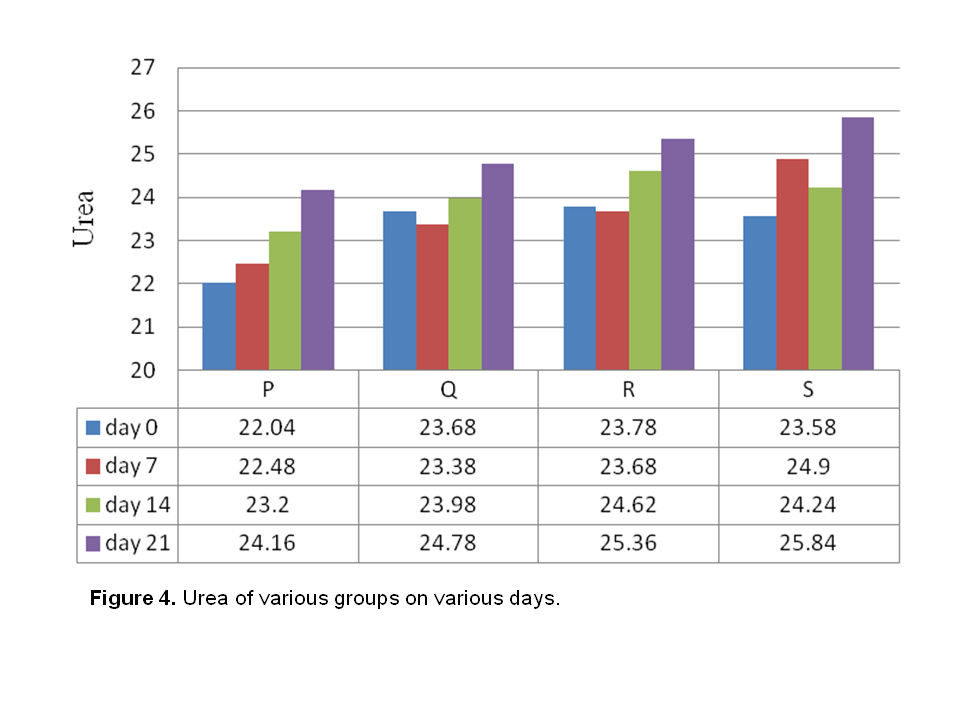 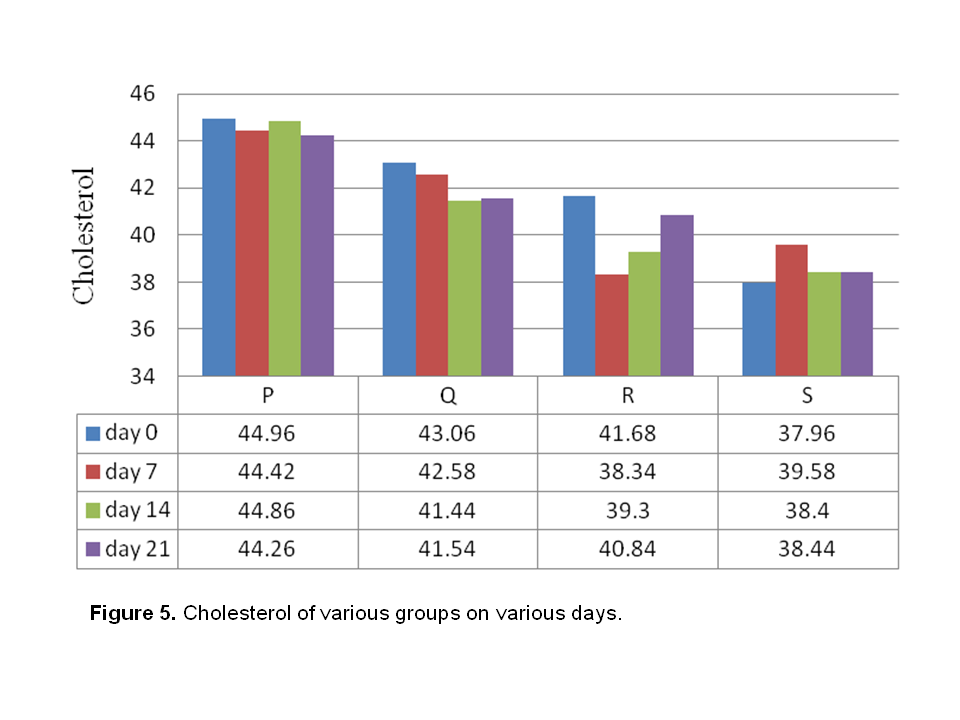 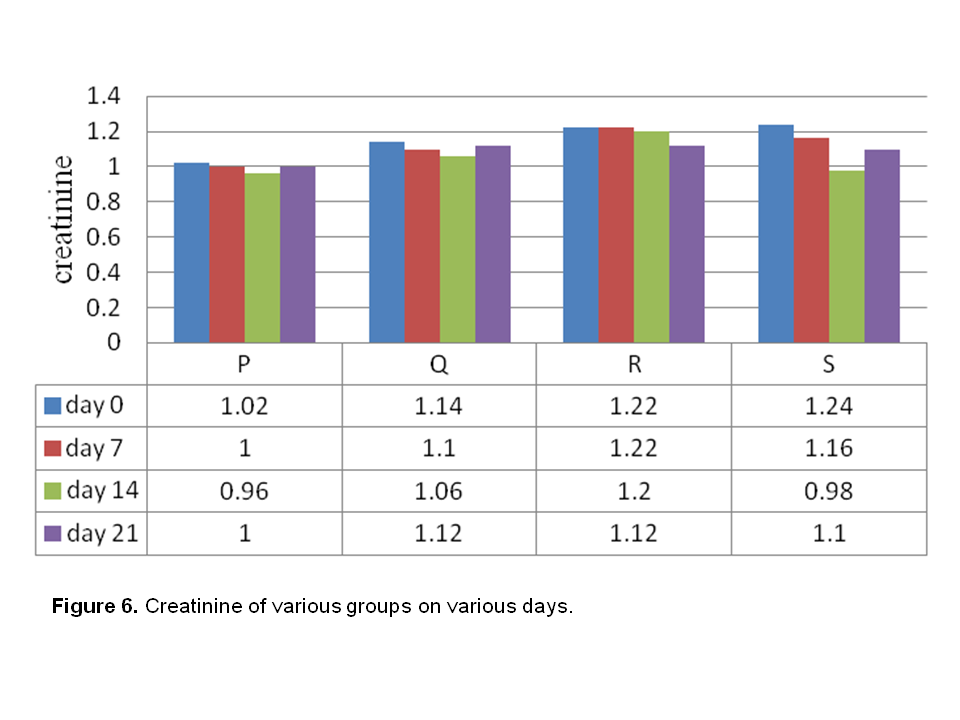 Haematology and plasma biochemistry are basic indictors and fundamental markers of various pathologies and pathogenic agents. Therefore investigators choose haematology and plasma biochemistry to diagnose disease within short period of time. Previous investigations found that A. vera extract improved immune cells and complement system (Amjad et al., 2014; Ghasem et al., 2011; leung et al., 2004; lm et al., 2005), active antibacteral agent (Hamman., 2008) improves ventricles key component of producing cerebrospinal fluid (Rengin et al., 2008). It is hypothetised that A. vera improves plasma proteins for that reason, plasma contents are assessed and it was found that it causes gradual changes in the means of total protein, albumin, globulin, urea, and creatinine in different groups were not significantly different (p < 0.05) but it shows regular variatios, gradual increase or decrease in all the three doses on 200, 300 and 400 mg/kg on different days of treatment, respectively. Besides this, it was found that urea is increased in all three doses on all three treated groups and highest increase was noted in group S that was given 400 mg/kg of A. vera extract (Tables 1 and 2 and Figures 1, 2, 3, 4 and 6), these investigation are contrary to Iji et al. (2010).

The study therefore concluded that chronic oral administration of A. vera extract has decreasing effects on cholesterol level and improves haematology. We believe further investigations with similar results will be helpful to know the mechanism of these modifications in the level of cholesterol and haematological parameters.

The author(s) have not declared any conflict of interests.