Silk,  the  natural  fiber  that   spells   splendor lusture  and elegance, has been an inseparable part of Indian culture and  tradition,  over  thousands  of  years. Mulberry sericulture in India is a commercially attractive and sustainable farm based economic enterprise positively favoring the rural poor in the unorganized sector. Nistari is a resistant variety of multivoltine mulberry silkworm (Bombyx mori) which contributes up to a great extent in the commercial production of cocoon. The efforts are being made to evolve new technologies that are effective, labour saving and eco-friendly. In order to increase, the production of silk, efforts have been made to study effect of ecological factor, photoperiod, artificial diet (Iwanvat and Ono, 1969), X-rays (Kanarev and Cham, 1985) etc. on the performance of silkworm. The Magnetization of eggs influences silk producing potential and incubation period of eggs (Upadhyay and Prasad, 2010b) and larval performance (Prasad and Upadhyay, 2011).

The more food ingested during this period, the more it gets converted and in turn contributes to silk protein. Delay in moulting is probably due to the inhibitory action of JH on ecdysone synthesis in B.mori (Sakurai et al., 1986; Trivedy et al., 1997). JH is claimed to inhibit protein synthesis in early treated larvae with later on region protein synthesis resulting in bigger silk gland and the result is improvement of cocoon shell weight (Garel, 1983). Some plants like Pinus longifolia, Abies balsomea, Psorelea corylifolia and Azadiracta indica act on B. mori larvae as bioactive juvenoid compounds (Nair et al., 1999). Keeping this in view, an attempt has been made to study the topical effect of bioactive phytojuvenoid on the improvement in the commercial parameters in this monphagous insect (B. mori), which is the aim of the present investigation.

The seed cocoons (pupa enclosed in silken case) of multivoltine mulberry silkworm (B. mori nistari), a native of West Bengal in India, were obtained from the silkworm grainage, Directorate of sericulture, Behraich Uttar Pradesh and were maintained in the plywood trays (23 x 20 x 5 cm) under the ideal rearing conditions (Krishnaswamy et al., 1973) in the silkworm laboratory, Department of Zoology D.D.U. Gorakhpur University, Gorakhpur. The temperature and relative humidity were maintained at 26 ± 1°C and 80 ± 5% RH respectively till the emergence of moths from the seed cocoons. The moths emerged generally in the morning at around 4 A.M. The tray in which seed cocoons were kept, was suddenly illuminated by light in the morning at 4 O’clock on 9th and 10th day of spinning.

The newly emerged moths were quickly picked up and kept sex-wise in separate trays to avoid copulation. The male moths were smaller in size but more active than the female moths which were comparatively larger and less active. The whole grainage operation was performed as per description given by Krishnaswamy et al. (1973) and Jolly (1983).

The gravid females laid eggs on the sheet of paper in the dark condition at 26 ± 1°C and 80 ± 5% RH. The egg laying moths were covered by open plastic cellules to prevent intermixing of egg masses deposited by different moths. After 24 h of egg laying, the female moths were individually examined for their disease freeness. The females were crushed individually in mortar with pestles and blood smears were examined by microscope under 15 x 45 magnifications for the detection of bacterial and protozoan pathogens.

Incubation of eggs and hatching

The disease free layings (D.F.L’s), thus prepared, were treated with 2% formaline for 15 min to increase the adhesiveness of eggs on the paper sheet and surface disinfection. Thereafter, the egg sheets with eggs laid on were thoroughly washed with running water to remove formaline and the eggs were dried in shade. The dried eggs were transferred to the incubator for hatching.

After two consecutive days of hatching, the silkworm larvae were collected with the help of feather of birds and reared to maintain a stock culture in the silkworm laboratory at 26 ± 1°C and 80 ± 5% RH and 12 ± 1 h light a day. Four feedings of the small pieces of fresh and clean leaves of Morus alba were given to the larvae and care was taken that food always remained in excess in the rearing trays. These larvae were taken for the purpose of experiments.

After completion of fifth instar, the ripe worms ceased feeding and ready for spinning. Now small mountages were provided to the ripe worms. The ripe worms soon begin the mounting which was completed within three days. Thus, sufficient number of cocoons was obtained from the silkworm larvae reared in our laboratory.

For extraction of phytojuvenoid, the needle of Pinus longifolia were collected, washed thoroughly with distilled water and dried in incubator at 37°C. The dried materials were powdered separately with the help of mechanical device. Further, 50 g powder was subjected to extraction separately through soxlet apparatus with 250 ml distilled water for 40 h. After 40 h of extraction, a little amount of concentrated solution of plant extract was obtained. The concentrated solution was dried and 6.45 g material was obtained in powdered form. The dried powder thus obtained, was dissolved in distilled water as 5 g in 25 ml water and this solution was used for further experiment, as 100% concentration of phytojuvenoid. For further experiment, the suitable narrow ranges of Pinus phyto-juvenoid concentrations viz. 10, 20, 30 and 40% were taken. Thus, four phytojuvenoid concentrations were applied topically by spraying as 1 ml on to 100 larvae separately. Three sets of experiments were designed viz., single, double and triple treatment of larvae.

For triple treatment, the third instar larvae in the initial stage were separated from BOD incubator. In the first treatment 100, third instar larvae, were treated by 1 ml of 10% concentrated solution of Pinus needle extract by sprayer and kept in BOD for rearing. The second treatment of same larvae was done just after third moulting that is at the initial stage of fourth instar larvae and transferred in BOD incubator for rearing. Third treatment was given at the initial stage of fifth instar that is just after fourth moulting of the same treated larvae as earlier. Thus, in the triple treatment third, fourth and fifth instar larvae were treated. Similar experiments were performed by 20, 30 and 40% concentrations of phytojuvenoid obtained from Pinus needle extract. A control set was always maintained with each set of experiment. All the data obtained by the experiment were analyzed statistically by two-way ANOVA and Post- hoc test.

To observe the volume of cocoon, healthy cocoons were tooken and cut slightly at the top end and the pupae was removed. The empty cocoon was filled with water with the help of pipette and the volume of required water was measured in milliliter. For the average volume of cocoon, 30 cocoons (three batches of 10 cocoons in each batch) were filled with water for each replicate. Three replicates of each experiment were made. 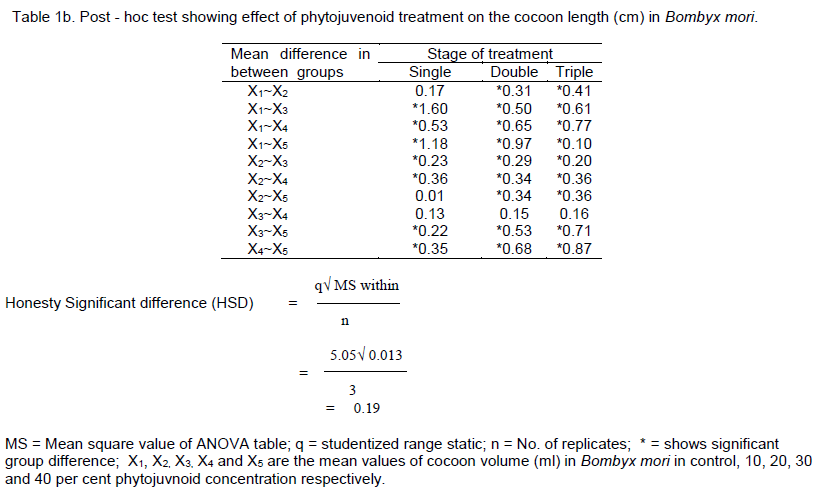 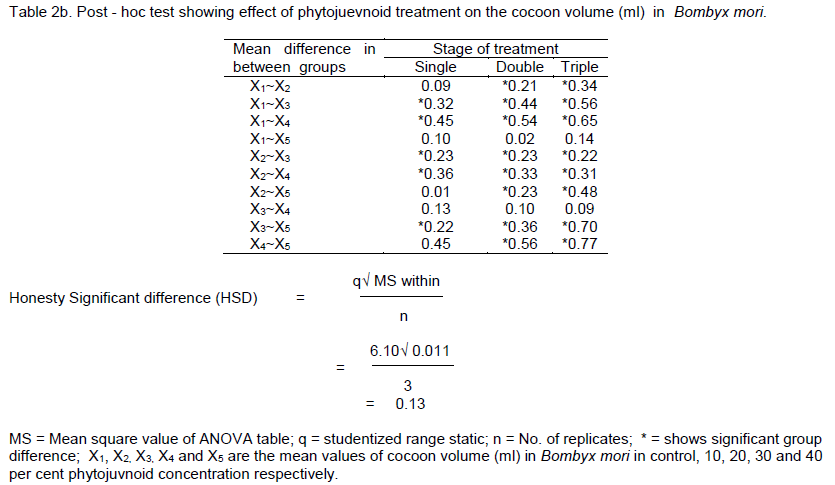 The reserpine of Ranwolfia serpentine plays a stimulative role in an increase in volume of cocoon (Sujatha and Rao, 2002a, b). Cocoon volume and width variables are important on account of the evolutionary aspects of the silkworm (Nakada, 1991, 1994) and the variability existed in the polyvoltine germplasm stocks with regard to cocoon volume (Rao and Nakada, 1998). The genes with regards to expression of cocoon volume have been identified (Gamo et al., 1985). Twenty-five eco-races of Antheraea mylitta alone reveal interesting variability in volume of cocoon (Rangaswami et al., 1987). The females spin larger cocoon than the males and thus the female cocoon volume is more than for male (Rangaswami et al., 1987).  Thus, with the increasing phytojuvenoid concentration from 10 to 30%, the volume of cocoon increased. It seems that the increase in the volume of cocoon may be due to the conversion of additional leaf consumed during the extended period into the silk material and the direct stimulatory effect of phyojuvenoid compound on the protein synthesis in silk gland.

The author(s) have not declared any conflict of interests.