Reasons for admission and mortalities following admissions in the intensive care unit of a specialized hospital, in Ethiopia

Many studies have been conducted in the intensive care unit (ICU). But little is known about the outcomes of ICU admissions. This is particularly the case in the ICU of developing countries. Thus, the aim of this study was to assess reasons and outcomes of admissions in the ICU of Jimma University Specialized Hospital (JUSH). A longitudinal study was conducted in the ICU of JUSH from February 7 to April 15, 2011. All patients admitted to the ICU during the study period were followed till discharge or death. Data was coded and entered into the Statistical Package for Social Sciences (SPSS) windows version 16.0 to generate descriptive statistics. Sixty nine patients admitted to the ICU during the study period were followed prospectively till discharge or death. Diseases of cardiovascular origin (30.4%) followed by surgical interventions (18.8%) were the major reasons of ICU admission. There were 26 (37.7%) deaths during the study period in the ICU. Mortality rate in the ICU was found to be significantly high. Diseases of cardiovascular origin were the major reasons for ICU admission. Hence, responsible bodies need to seek for possible ways of reducing this unacceptably high mortality in the ICU by devising quality control mechanisms.

Hospitalization should occur or should be considered depending on each patient’s presenting symptoms and physical examination. The decision to admit patients to the medical wards was determined by age, co-existing illness, physical and laboratory findings, the ability of the patient to comply reliably with an oral medication, and the resources available to the patient outside the hospital (Dipiro et al., 2008; Mandell and Wunderink, 2008). The death rate in the medical wards of Jimma University Specialized Hospital (JUSH) was reported to be 12.6%, communicable diseases being the most common reasons for admission (Ali and Woldie, 2010).

Most patients do not require admission to the intensive care unit (ICU) and are admitted to a monitored unit or general medical floor. ICU is a consolidated area of a hospital where patients with acutely life threatening illnesses or injuries receive around the clock specialized medical and nursing care, such as mechanical ventilation and intensive cardiac monitoring (Kohn et al., 2000; Leapfrog Group,  2014).  Admission  to  an  ICU  may  be required if the patient experiences hemodynamic instability requiring frequent monitoring of vital signs, invasive hemodynamic monitoring, or rapid titration of intravenous medications with concurrent monitoring to assure safe and effective outcomes (Dipiro et al., 2008; Mandell and Wunderink, 2008). Apart from causing death, the type and severity of illnesses can directly affect the length of stay in the ICU. Although ICU admis-sion for asthma is relatively uncommon, it remains to be associated with appreciable in-hospital mortality (Lange et al., 2009; Mayr et al., 2006; Gruenberg et al., 2006; Roch et al., 2011; Gupta et al., 2010).

The estimated mean in France, in a multi-center study, is about 15% for ICU mortality and 6 to 25% for hospital mortality after ICU discharge, yielding a hospital mortality rate of 20 to 30%, with substantial variations across studies (Azoulay et al., 2003). A recent systematic review revealed that patients admitted to an ICU over the weekend appear to be at an increased risk of death, while nighttime admissions were not associated with an increased mortality (Cavallazzi et al., 2010). On the other hand, a study reported from Canada concluded that time of admission does not have significant effect on outcome of patients admitted to the ICU (Ala et al., 2011). A study on acute myeloid leukemia showed that survival was inferior in those patients admitted to the ICU compared to those who were not admitted. However, no difference between intensive care and non-intensive care patients was found concerning continuous complete remission at 6 years or survival at 6 years (Schellongowski et al., 2011).

However, much cannot be said about ICUs in Ethiopia since there are no studies so far. Therefore, this study is reporting the findings of the analysis done from the data collected primarily to pick medication errors at the ICU of JUSH (Agalu et al., 2011). This analysis aimed to identify reasons for admission and outcomes of admissions to the ICU in JUSH.

The longitudinal study was conducted as part of broader cross-sectional study on medication errors (Agalu et al., 2011, 2012) from February 7 to April 15, 2011 in the ICU of Jimma University Specialized Hospital (JUSH), a teaching hospital located in Jimma town, Southwestern Ethiopia, 350 km from Addis Ababa. JUSH is the only referral hospital in Southwest Ethiopia with 450 beds and 558 health professionals where a multidisciplinary team of diverse professionals   provide   a    range  of   health   care   services   for approximately 9000 inpatients and 80,000 outpatients each year. The ICU has 6 beds serving patients from the different departments of the hospital (Jimma University Specialized Hospital, 2014).

Data was collected using a pre-tested structured data collection format by one trained clinical pharmacy post-graduate student together with principal investigator. Since this paper is the product of the broader study on, accessory data was compiled from that study. The content of the format included demographic variables, diagnoses and co-morbidities, dates and time of prescription, name of the medication, dosage forms, doses, frequency, and duration of medications prescribed. Demographic information about patients was obtained from patient card and medication charts. Diagnosis made by physicians was taken from patient cards. Finally, the data was edited, coded, entered into SPSS windows version 16.0 and finally cleared. Descriptive statistics were generated to meet the objective.

Prior  to  the  study,  ethical  approval  was  obtained  from  the  Ethical  Review  Board  of  Jimma University. The management of the hospital was requested for cooperation with formal letter. Written consent was obtained from the nurses, physicians and patients included in the study and names of patients and the health professionals were replaced with their initials. All data obtained in the course of the study were kept confidentially and used solely for the purpose of the study. 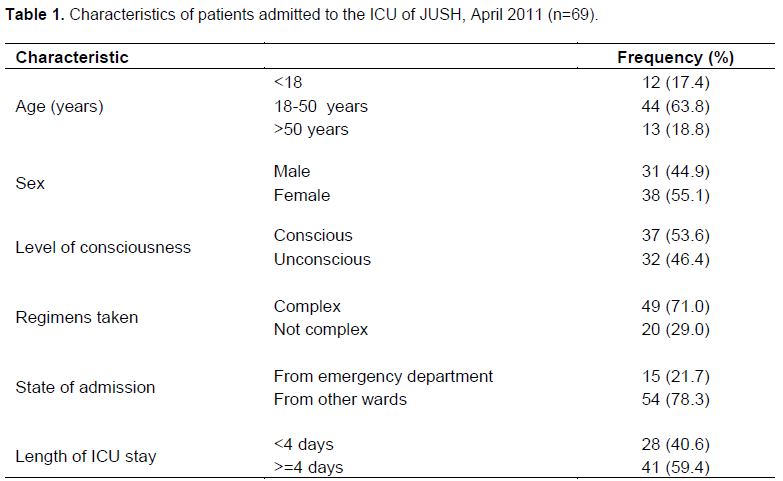 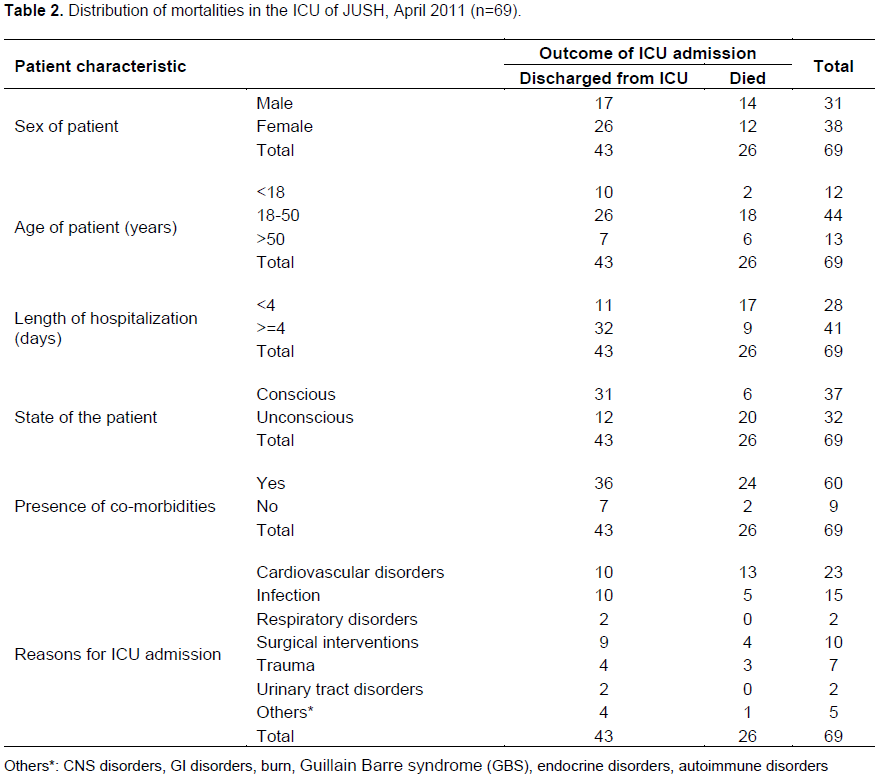 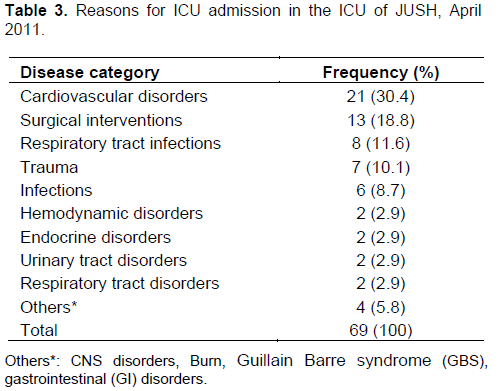 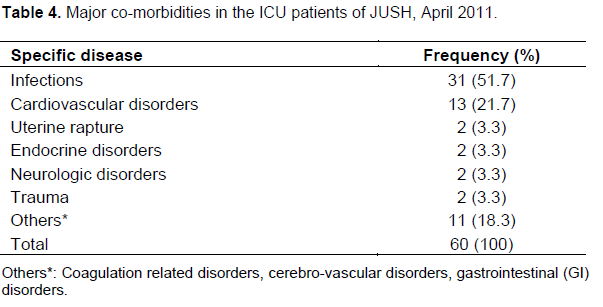 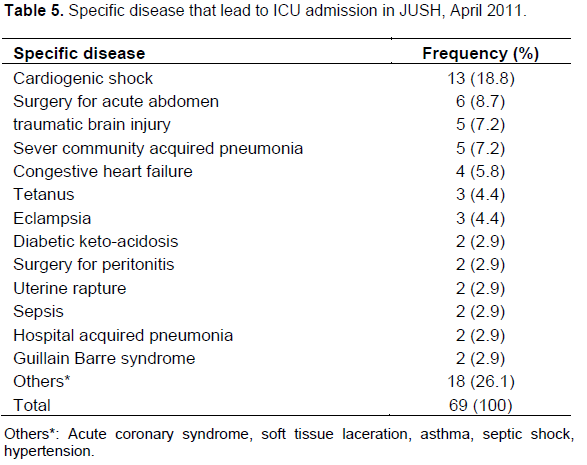 According to this study, the commonest diagnoses that lead to ICU admission were diseases of the cardiovascular system (30.4%) followed by surgical interventions of various reasons (18.8%) and respiratory tract infections (11.6%).  Similar finding was reported from Austria (Lange et al., 2009) but it was different from what was found in the medical wards of JUSH (Ali and Woldie, 2010), where infectious diseases were the commonest causes of admission.

In this study, infectious diseases were the commonest (51.7%) co-morbid conditions followed by cardiovascular disorders (21.7%). This is similar with the finding in the medical wards of JUSH. This might be explained by the fact that majority of the ICU admissions in the JUSH come from the medical wards where patients with chronic diseases often have co-morbid infectious (Ali and Woldie, 2010).  Unlike the previous study where severe community acquired pneumonia, pyogenic and chronic meningitis, and malaria were common (Ali and Woldie, 2010), the present study showed that cardiogenic shock, surgical interventions and traumatic brain injury were the major reasons that lead to ICU admission. This difference might me due to the difference in the ward where ICU only serves severe cases as compared to the general medical wards.

The death rate in the ICU was 26 (37.7%) which was higher than findings reported in earlier works from France (multi-center study), ICU of Asthma in London and JUSH (Ali and Woldie, 2010; Gupta et al., 2004; Azoulay et al., 2003). On the other hand, it is lower than the finding of a study from Australia (Lange et al., 2009). The differences observed in this regard might be related to the difference in patient profile and the ICU setting in which the patients were managed. Being the part of broader study in medication errors and  based on accessory data, this study did  not  assessthe   severity   of   disease  conditions  during  admission.

Similarly, it did not calculate prognostic score, standard mortality ratio, comorbidity index and did not use Glasgow Coma Scale to determine the level of consciousness. It has to be noted that this study did not consider death of patients after discharge from the ICU. Moreover, it did not determine all the possible causes for death including medication errors. Since patient cards and medication charts were reviewed prospectively, all the diseases and co-morbidities patients had not been identified during data collection.

All these might affect the quality of data, thus should be used as the possible insights for the future studies in the ICU.

In conclusion, diseases of cardiovascular origin were the major reasons for ICU admission and there were significant deaths among admissions in the ICU. Hence, responsible physicians and others concerned need to seek for possible ways of reducing this unacceptably high mortality in the ICU by determining the causes for it. Supporting such  efforts  with  further  studies  to  identify predictors of mortality in the ICU is warranted.

The authors declare that they have no competing interests.

The authors are thankful for the funding they received from Jimma University during the conduct of this study.