There is a proverb commonly mentioned in the Philosophy of Science that is “Before positive science, there was a positive technology” (TUSIAD, 2002, p.89). Before human beings establishing the real methods of positive science until 16th century, there were different technologies in human life from agriculture to different areas. Especially genetically inter and intra-breeding of some animals and plants by crossing different traits (hybridization) that plants and animals had economical importance (United Nations, 2002). Without knowing the real reason how milk can be converted to yogurt or the juice of grape turns to wine or wine gear (ancient brewing), human beings acquired those technologies some of which are currently called biotechnologies. On the other hand, to describe technology is not easy as it seems because of many different descriptions related to technology. However, one of the accepted definitions of technology is “developing natural things to use in daily life of human beings”.

Historically, biological sciences showed the most important developments after 1940’s, such as the discovery of the life saving antibiotics and green revolution by using pesticide and putting chemical compounds into soil (Doelle, 2001). Especially many unknowns in molecular biology area began to be known with the finding of molecular shape of DNA by Watson and Crick. These developments in molecular biology and DNA rapidly gave a way to many inventions, discoveries and applications, one of which later was called bio-technology. In fact, traditional biotechnological methods had been known by human beings as mentioned above but it was difficult to explain how those things happened. Currently modem biotechnological methods and their application areas have been spread out from medicine, food industry, and agriculture to pharmacy. On the other hand, public knowledge and interest as well as attitude toward biotechnology are not clear. From one point of view, biotechnology could save human beings from food shortages and find some solutions in medicine, pharmacy, ecological and environmental issues, etc. However, general public attitudes indicate some negative view points such as; genetically modified foods and stem cell researches. Pardo, Midden & Miller (2002) reported that in the European Union, public attitudes toward biotechnology should be classified as negative by using Eurobarometer data but in their study the attitudes of general public showed some progress in positive direction. Additionally, another study mentioned the similar point that European consumers were not fully aware of biotechnology but public trust toward biotechnology decreased significantly (European Commission, 2000; Fritz et all., 2003). The reasons why people have some negative attitudes toward biotechnology mostly seem to be emanated from misuse of chemical compounds, pesticides, herbicides, and irrigations (Doelie, 2001). Despite of some negative view points related to biotechnology, the currents problems of worlds such as starvation, feeding human population, finding new reliable and sustainable energy resources, treating some diseases, putting new drugs and vaccines would be solved through biotechnological researches and innovations.

Lately, many studies mostly in developed countries have put extra efforts the awareness of public, students, teachers toward biotechnology (Olsher & Dreyfus, 1999; Chan & Lui, 2000; France, 2000; Dunham et al., 2002; Dibartolomeis & Mone, 2003; Lewis et al., 2003; Rota & Izquierdo, 2003). By means of these studies, it would be possible that a new disciple could be called biotechnology education area covering the attitudes and awareness of general public, teachers and students and also promoting biotechnological products with the all ways, such as giving education, seminars in order to change the attitudes positively toward biotechnology and misconceptions related to biotechnology. On the other hand, making some comparisons between developed and developing countries what are the attitudes, awareness, and misconceptions in general public, students and teachers shows importance so that to conduct a research covering biotechnological studies pertained to the knowledge levels of teacher candidates and teachers who are responsible for teaching biotechnological concepts, topics and issues in the firs hand seems to be necessary in the developing countries such as Turkey.

The purpose of this study was to determine the knowledge levels of Turkish university students in relation to popular biotechnological items, such as agricultural biotechnology, human health and pharmacy. There are two major questions of this study which are at the following

For example, one of the most important studies conducted by European Commission (2006) revealed not only public attitudes among European Countries toward biotechnology but also toward other scientific and technological applications. In contrast to the Eurobarometer report in 2000 by European Commission, the acceptance of biotechnology among European seems to rise but they still keep some suspicions related to the GM foods. The reason for rising is not very clear but the newly entered countries to the European Unions might have changed the perceptions of European public. Another study concerns the same point investigating attitudes toward biotechnology in European Union that in early studies (European Union, 2000) public opinion indicated negative attitudes but in this study public attitudes were going to be shaped positively (Pardo, Midden & Miller, 2002). On the other hand, there is still a concern for GM foods. In the other side of Atlantic, a study by Fritz and others (2003) showed that American awareness of students and public was not as high as in Europe despite of much of genetically modified food produced in the US.

The questions what are the most important tools to influence public awareness and attitudes toward biotechnology tried to be answered by the study of Schoell and Guiltinan (1995, cited in Frits and others, 2003, p.179). In this study, it was found that the consumers’ attitudes were influenced by the family members, and friends. Additionally, National Science Foundation (2004) study indicated that scientific information related to global warming and biotechnology mostly was learned through television and printed media as well as internet., However, the adequate knowledge can be only found in the reliable journals while mostly the knowledge covering biotechnology comes from media in which it was difficult to find a real experts in the subjects of biotechnology among journalists (Vestal & Briers, 2000).

The questionnaire contains 20 questions relating to knowledge of popular biotechnological issues. The questionnaire was first time developed by Darcin & Turkmen (2006) for a study conducted in a Turkish university in order to measure the knowledge levels of science teacher candidates at biotechnological issues and topics. The responses of students for each item in the questionnaire correspond that if the meaning of a statement is correct, it is expected to be checked the true box, if the meaning of a statement is not correct, the answer is to be the false box. Finally, if they have any idea about a statement, they chose the neutral box. The students had 20 minutes to complete the survey. Data obtained were analyzed by SPSS (Statistical Package for the Social Sciences) program. Two-way ANOVA test was run to compare students’ biotechnological knowledge levels based on science education and elementary education departments as well as gender differences. Additionally, frequency, percent analysis and quantitative information were evaluated to reveal the knowledge level of Turkish elementary and science teacher candidates. 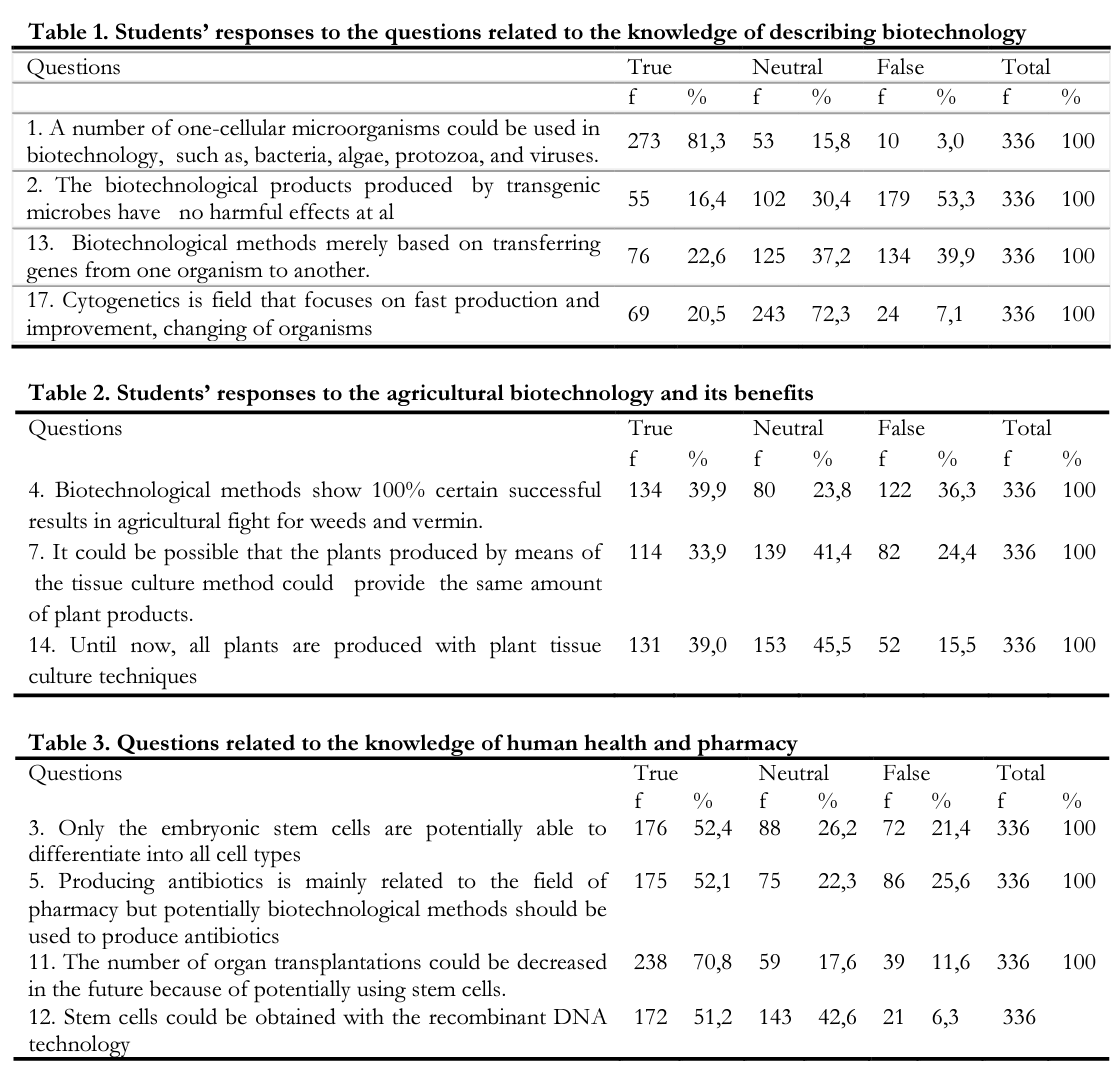 36,3% of students recognized that biotechnological methods do not show 100% certain successful results in agricultural fight for weeds and vermin. A minority of students answered 7th and 14th questions correctly (33,9% and 15,5%). The responses point out that the knowledge level of majority of students was below 36,3% in the statements covering agricultural biotechnology and its benefits. Students responses the questions related to human health and pharmacy are shown in the table 3. 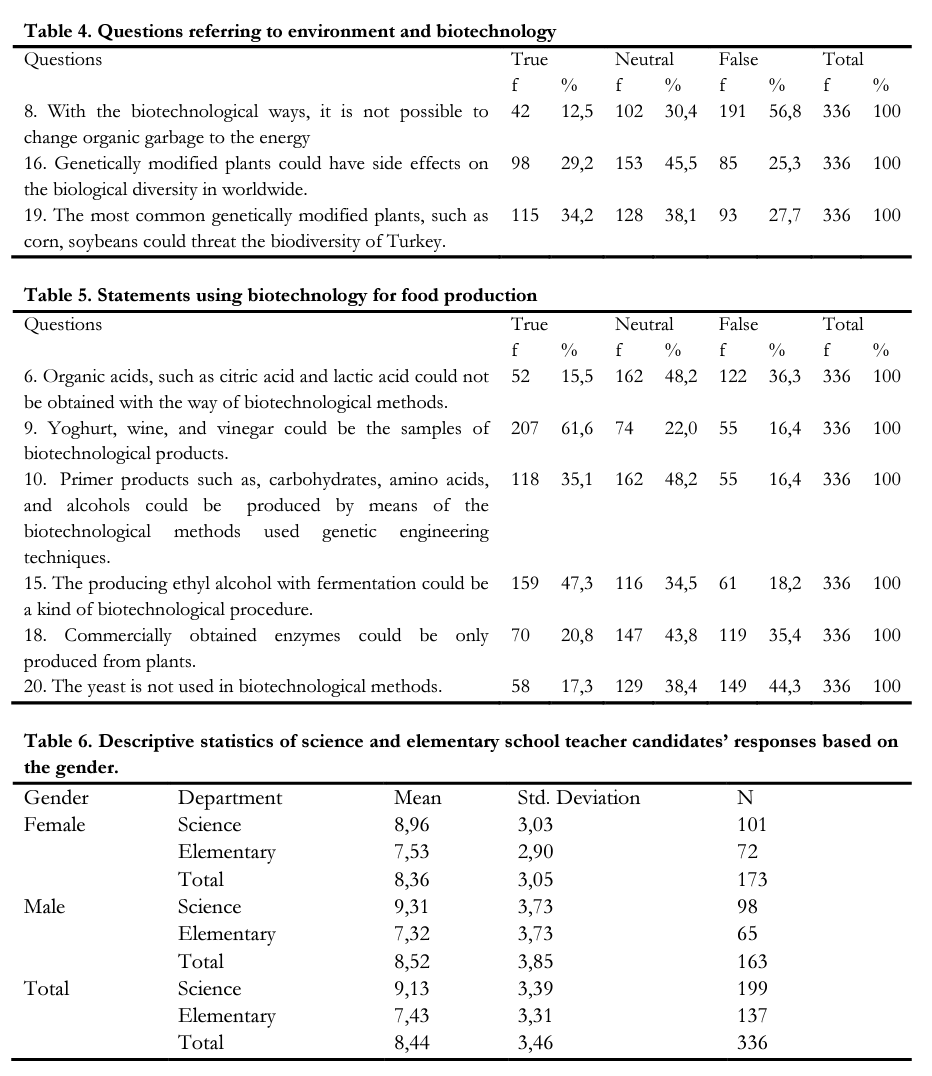 It was suggested that most of students answered correctly 3rd, 5th and 11th questions (52,4%; 52,1%; 70,8%). It was said that generally, the students had enough knowledge about human health and pharmacy. On the other hand, 12th question elicited a neutral response (51,2%) indicating that students had unstable knowledge of how stem cells were obtained by using biotechnology. Statements about environment and biotechnology were 8, 16, 19th questions and results could be seen in the Table 4.

56,8% of students answered correctly to use organic waste for being fuel with biotechnological processes. A minority of students (29,2%) were aware of genetically modified plant’s side effects on the biodiversity in the world wide. Additionally, a majority of students did not recognize adverse effects of genetically modified plants in Turkey. Students’ responses using biotechnology for food production are summarized in the Table 5.

It was shown that a minority of students know using biotechnology for production of organic acids and primer products (36,3% and 35,1%) in the statements of 6 and 10. 44,3 % of students gave true responses to use of the yeast in biotechnological methods. On the other hands, majority of students answered questions of traditional biotechnology correctly (9th and 15th). The results of the difference between female and male teacher candidates’ knowledge levels related to biotechnology is given in the following tables 6 and 7.

Despite of a mathematical difference between female and male science and elementary education major students’ responses toward biotechnological issues and topic, the difference seems to be not very high. On the other hand, the mean of science education major students’ responses indicates a higher difference than those of elementary education major students’ responses. In order to check the significance level of the difference between genders as well as departments, generally an independent t-tests should been run because of two different independent groups. However, to show any interaction between genders and departments in which students follow their educations to become a science and elementary teacher is necessary to run a two-way analysis of variance (ANOVA) test, in addition to simple main effect tests. The following table reveals the results of two-way ANOVA test.