Enactus (formerly known as students in free enterprise or simply SIFE), is a global organization that seeks to foster entrepreneurial leadership by creating sustainable partnerships among university students, higher education institutions (HEIs), business and corporate leaders. The focus of Enactus is to encourage students to identify entrepreneurial solutions to socio-economic challenges within their communities. Students, in other words, are challenged to think of problems within their communities as entrepreneurial opportunities. To tackle these problems, Enactus requires students to design entrepreneurial projects that address the three key Enactus pillars of profit, people, and planet. Enactus projects, therefore, seek to improve both the quality of life and standard of living of the ‘people in need’ without necessarily compromising the environment (or planet) (Enactus, 2013b). Enactus projects, therefore, create a platform through which university students learn real-life business skills, and at the same time contribute towards creating better communities.

The first type of knowledge relates to individuals’ ability to recognize entrepreneurial opportunities. This involves the discovery and evaluation of new venture opportunities. Recognizing business opportunities involves being able to identify a market or a group of people facing a particular problem. Solving this problem often involves the development of an innovative or new approach. For instance, an Enactus student (or entrepreneur) might recognize that a farming cooperative run by a group of widows in a certain township is experiencing difficulty in accessing profitable markets. The entrepreneur recognizes that by helping the farmers brand then- produce, she can link them to a local grocery store. By so doing, the entrepreneur effectively acts as both a consultant and liaison, which entitles her to a small commission.

1.3. Personal attitudes. Personal attitude refers to individuals’ perceptions of the personal desirability of performing entrepreneurial behavior. According to Nicolaides (2011), an attitude towards an act is the degree to which a person has a favorable or unfavourable evaluation or appraisal of the behavior in question. The later authors seem to have derived their views on personal attitudes from Ajzen’s (1991) Theory of Planned Behavior (TPB) model. The TPB pre-supposes that individuals’ attitudes towards certain actions are subjective conscious phenomena. In the context of entrepreneurship, PA, therefore, refers to the degree to which individuals hold a positive or negative valuation towards entrepreneurial behavior (Miralles, Riverola & Giones, 2012). As such, it is both a mental affair that deeply lies within oneself. At the same time, the environment can also influence it. In summary, personal attitude is a mentally prepared state for any known subject.

1.4. Enactus South Africa. Enactus is an international non-profit organization that brings together student, academic and business leaders who are committed to using the power of entrepreneurial action to improve the quality of life and standard of living for ‘people in need’. Guided by academic advisors and business leaders, participating students form teams on their campuses to create and implement entrepreneurial projects. The experience not only transforms lives, it helps students to develop the kind of talent and perspective that is essential to leadership in an evermore complicated and challenging world.

Enactus South Africa comprises 27 teams from each of the country’s HEIs. In total, the country has 2166 members participating in 162 projects (Enactus, 2013a). Enactus holds an annual national competition, which provides a platform for teams to showcase the impact of their outreach projects to be evaluated by executives serving as judges. National champion teams advance to the prestigious Enactus World Cup to represent their country (Enactus, 2013b).

H3: Higher levels of personal attitude are positively related to a higher level of entrepreneurial intentions.

The proposed conceptual model for the study can thus be summarized as follows: 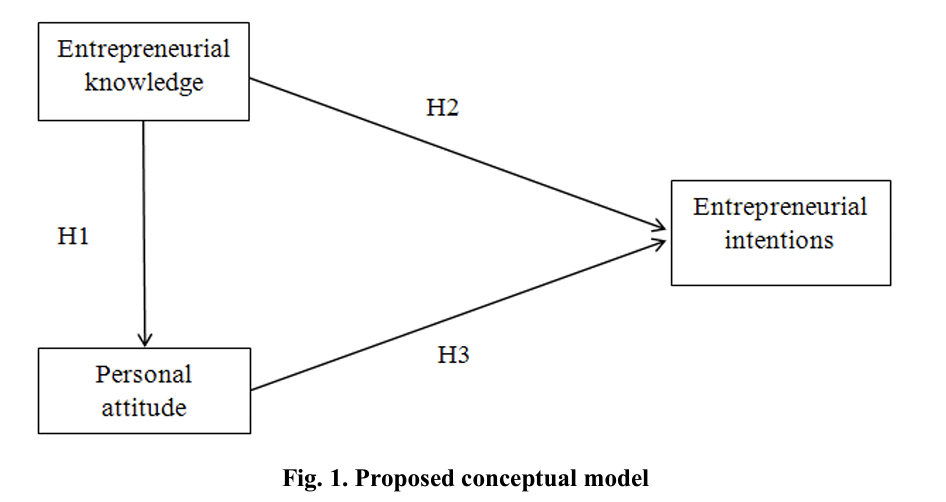 2.1. Research instrument development. Linan's (2004) instrument was adapted to suit the South African settings. The resultant questionnaire was pretested on Enactus undergraduate students from the Tshwane University of Technology chapter. The researchers requested the participants of the pilot study to provide comments on whether the questions would be understood by the target population. The final questionnaire, as depicted in Table 1, included a cover letter, instructions to complete the questionnaire, and structured questions covering respondents’ demographic information, entrepreneurial skills and abilities, personal attitudes, and entrepreneurship intentions.


A cover letter was attached to every questionnaire, and explained the purpose of the study, confidentiality agreement, and instructions for completing the questionnaire. Also, instructions were provided at the beginning of each section as well as an explanation on the interpretation of the measurement scale (Leedy & Ormrod, 2005). The questions in the sub-scales were measured using a Likert scale (1 = strongly agree; 5 = = strongly disagree).

2.2. Sampling design. In order to get a representative sample, stratified sampling methods were applied. Each of the 27 participating HEI was considered to be a stratum. To determine the size of each stratum, the sample size determination factor in which the ratio of the number of questions to be factor analyzed versus the sample size, as suggested by Field (2009), was utilized. The ratio of 10:1 was applied. The final questionnaire contained 27 questions to be factor analyzed, thus a minimum sample size of (27 x 10) 270 respondents was considered the minimum acceptable sample size (Pallant, 2010, p. 183). This, therefore, translated to at least 10 participants from each HEI. The final sample, however, constituted 355 respondents from 27 Enactus teams, which surpassed the recommended 270.

2.3. Data collection. Research assistants were used to assist with collecting data at the 2013 Enactus South Africa Annual National Competition at the Sandton International Convention Centre held from the 10th to the 11* of July 2013. The self-completed (adapted) EIQ scale was used to collect data (Linan, 2004). At least 20 questionnaires were distributed to each participating HEI. Student assistants approached team presidents from the respective HEIs (or Enactus Chapters) and asked to distribute the questionnaires to their teams. A collection point at the event’s reception area was erected so that the team presidents as well as their members could drop off the completed questionnaires. In total 540 questionnaires were distributed. Of these, 355 fully completed questionnaires were returned and used for further analysis.

2.5. Findings. The study was conducted at the Enactus Annual National Competition 2013 with a sample size findings of n = 355 respondents (Enactus students) who were captured for the study, 60.8 percent of whom were males and 39.2 percent of whom were females (see Table 2 below).

Table 2. Demographic profile of the sample


2.6. Descriptive analysis. Since it was established that entrepreneurship and the three variables under study were socially defined, it was important to determine whether diese differed across gender.

2.7. Validity and reliability. To test the scale’s construct validity of the entrepreneurial intentions questionnaire, confirmatory factor analysis was used (Hair, Black, Babin, & Anderson, 2014). In particular, principal axis factoring (PAF), with Promax rotation was utilized to test whether the constituent questions of each sub-scale loaded onto the specific factor. As usual in confirmatory factor analysis (PAF), the specific number of factors was pre-specified. In this case, three factors, as identified in Figure 1, were specified. Consequently, a three- factor solution that accounted for 75 per cent of the variance was extracted. Table 4 below summarizes the results of the PAF.


Following the PAF, each of the resultant sub-scales was measured for internal consistency (reliability) by means of the Cronbach’s alpha coefficient. Item selection and scale purification using inter-item and item-to-total correlations were used to test internal consistency. As commonly recommended by statistical experts, the 0.7 cut-off point of 0.7 was used in this study (Field, 2009). As shown in Table 3, all three sub-scales of the questionnaire were observed to have very high measures of internal consistency, all in excess of.880.

2.8. Hypotheses testing. Having established both the construct validity and reliability of the subscales, the researchers proceeded with hypotheses testing. Simple linear regression analysis was used to test the formulated hypotheses. In total, three hypotheses as proposed by the conceptual model were tested. Figure 2 summarizes the findings from the tests of hypotheses.

Considering results from Table 3 and Figure 2, it becomes clear that the particular cohort of Enactus students has a very high level of knowledge and personal attitude towards entrepreneurship. Furthermore, Figure 2 demonstrates that there is strong positive relationship among the variables.

While participation in Enactus has long been identified as an instrumental aspect in developing entrepreneurship intentions among participating students, the specific relationship of Enactus participation on entrepreneurship intentions has not been sufficiently tested in research, at least in South Africa. As stipulated above, the purpose of this paper is to determine the influence of Enactus participation on EK and PA, which in turn influences EL Ebewo (2013) studied the effects of entrepreneurship education among University of Botswana students, and found a positive relationship between personal attitudes and entrepreneurship intentions. The regression coefficient was В = 0.378. In this study, the В score В = 0.624 was almost twice that which was observed in Ebewo’s study. The stronger relationship in this study could be attributed to the fact that the sample consisted of Enactus students whereas in Ebewo (2013), both Enactus and non- Enactus students were sampled and the number of the reported findings was out of the 343 sample.

Furthermore, when considering the relationship between entrepreneurial knowledge and entrepreneurial intentions, the Botswana students were observed to have В = 0.411 as compared to В = 0.510 using regression analyses, mainly because the Botswana group was not Enactus members, just generally randomly sampled student’s at UB. Again looking at Ebewo (2013), using regression analyses further found that the same group’s entrepreneurial knowledge was relatively higher than general students sampled in UB. This further suggests that attitudes can be viewed as the steppingstone to entrepreneurial intentions; thus to increase the level of entrep-reneurial initiative among students it is necessary to increase positive attitudes towards entrepreneurship. Research has shown that an individual’s behavior is highly influenced by personal attitude towards behavior necessary to be successful (Garavan & O’Cinneide, 1994).

Several scholars (Garavan & O’cinneide, 1994; Herrington, Kew, Simre, & Turton, 2011; Jack & Anderson, 1999; Krueger, Reilly, & Carsrud, 2000; Peterman & Kennedy, 2003; Rae, 2010; Zeng et al., 2011) found similar results in terms of entrepreneurial knowledge and personal attitudes of students towards entrepreneurship. This study argues that on a specialized sampled group of students such as Enactus, the level of entrepreneurial knowledge tends to be higher than among other groups; the same with personal attitude towards entrepreneurship or the intentions to become an entrepreneur. This can be confirmed by the findings of this study.