Fiscal decentralization and macroeconomic stability: the experience of Ukraine’s economy

European integration processes, functioning in a changing environment, uncertainty and inconsistency of government decisions cause socio-eco- logical and economic conflicts and contradictions in all spheres of economic activity. Consequently, this leads to imbalances and instability in the national economy. Thus, it is necessary to distinguish the factors and study the strength of their impact on macroeconomic stability.

It should be noted that one of the priority goals of Sustainable Development Strategy “Ukraine - 2020” is to ensure national macroeconomic stability, which in turn will form the basis for further sustainable growth of the country. The Strategy aims to achieve these goals by implementing a number of reforms, including decentralization reforms. In addition, decentralization policy is aimed at moving away from the centralized governance model, ensuring effective local self-government and building an effective regional government system in Ukraine, implementation of The European Charter of Local Self-Government, the principles of subsidiarity, universal and financial self-sufficiency of local authorities (Strategy, 2015).

Therefore, in economic literature, there are several approaches to the definition of macroeconomic stability concept: as the equilibrium of the basic macroeconomic indicators (Zuchowska, 2013; Hurduzeu & Lazar, 2015; Ionita, 2015), as the process of good macro-management of the country’s economy through setting out an effective government policy (Kuroyanagi et al., 1996), as the stability of financial and monetary system of the national economy (Guarata & Pagliacci, 2017; Vasilyeva et al., 2016; Polchanov, 2017), as a stability of financial market, particularly banking sector (Slav’yuk, 2017; Yushko, 2016), as a reduction in the amplitude of fluctuation of the main macroeconomic indicators (Ahangari et al., 2014; Montiel & Serven, 2006), as the basis for sustainable economic growth (Haghighi et al., 2012; Easterly & Kraay, 2000), as sustainable development of the corporative sector in economy and stock market, which is a base of national economy (Chigrin & Pimonenko, 2014; Leonov et al., 2014), etc. Besides, Kmetovä et al. (2017), noted that the effective and legitimate tax systems which correspond to EU requirements were considered to be an integral part of the strategy which leads straight to macroeconomic stability. Moreover, Zigman (2017) noted that fiscal councils are extremely important to ensure a macroeconomic stability through conducting the fiscal policy and decreasing the influence of politics on public finance management. Dzomira (2017) approved that macroeconomic stability depends on the public sector stability. In this case, Dzomira (2017) proposed to minimize the governance and financial health risks in the public sector. However, the concept of macroeconomic stability includes price level stability as the key part.

Studying the impact of decentralization on economic growth and macroeconomic stability Martinez-Vazquez and Mcnab (2006) conclude that decentralization has a positive impact on price stability in developed countries, although they indicate that this impact is much less clear in developing and transitional countries. As an indicator of macroeconomic stability, the authors use the inflation rate, while emphasizing that for more thorough evaluation of macroeconomic stability, it is better to use a composite index, equal to the sum of the unemployment rate and the inflation rate, however, relevant data shortage for 52 developing and developed countries for the period 1972-1997 did not allow the authors to conduct a more in-depth research.

One of the conclusions of the work “Decentralization and macroeconomic instability: The importance of political and institutional factors” (Jalil et al., 2012) is the denial of conventional wisdom regarding catastrophic impacts of decentralization on macroeconomic stability.

Thornton (2007) conducted a study of 19 OECP countries for the period 1980-2000 and found that the dependence of impact of revenue decentralization on inflation was not statistically significant. At the same time, for more qualitative analysis of relationship between fiscal decentralization and economic growth, the author focuses on the share of revenue of sub-national governments, over which sub-national governments have full autonomy.

Scientists from The University of Queensland (Australia) Bodman, Campbell, Heaton, and Hodge (2009) investigated the impact of decentralization on the Australian economy at both aggregate and state levels using the regression model:

where gt - the value of the macroeconomic variable of interest in period t = 1972, 2005; xt - a set of control variables that are useful in explaining the determinants of the macro- economic variable, including a constant term; dt - a measure of fiscal decentralization; st - the error term, both in period t, did not show straightforward impact of fiscal decentralization on the Australian economy. Consequently, at the aggregate level, decentralization is found to decrease medium-term economic growth, worsen the budget balance and increase, and at the state level, decentralization is generally found to have no significant impact on the distribution of income but a weak negative effect on economic growth the size of the public sector (Bodman et al., 2009).

We use the empirical model suggested by Bodman, Campbell, Heaton, and Hodge (2009), Iqbal and Nawaz (2010), Makreshanska and Petrevski (2015) to analyze the relationship between fiscal decentralization and macroeconomic stability. It is given in the following functional form:

Model (2) can be presented as a regression equation:

where FD represents the various alternative measures of fiscal decentralization; Z is a vector of other exogenous variables explaining the behavior of macrostability over time (the growth rate of money supply М2, investment Inv and openness of the economy Open); a, ß and 5 are the constant, s represents the error term.

As stated in Iqbal and Nawaz (2010), evaluation of fiscal decentralization can be realized both for revenues and expenditures, hence, the regression equation can be of three types:

where ID,, - the ratio of local budgets revenue to the consolidated budget revenue;

for revenue and expenditure decentralization simultaneously:

As a measure of macroeconomic stability, we will use the following variables:

where MI is Misery Index, UR unemployment rate and INF is inflation rate of the economy;

suggested by the Director of the Institute of Finance in Warsaw, Professor of Economics Kolodko (1993) and was further developed in research by Zuchowska (2013), Hurduzeu and Lazar (2015), Ionita (2015). The basis for this concept is the calculation of the area of the pentagon. Its vertices consist of basic macro- economic indicators (index of changes in the GDP level (r); unemployment rate (U}; rate of inflation or consumer price index (CPI}-, ratio of budget balance to GDP in percent (G); current account balance (C4), which is presented as a ratio of current account balance to GDP in percent): 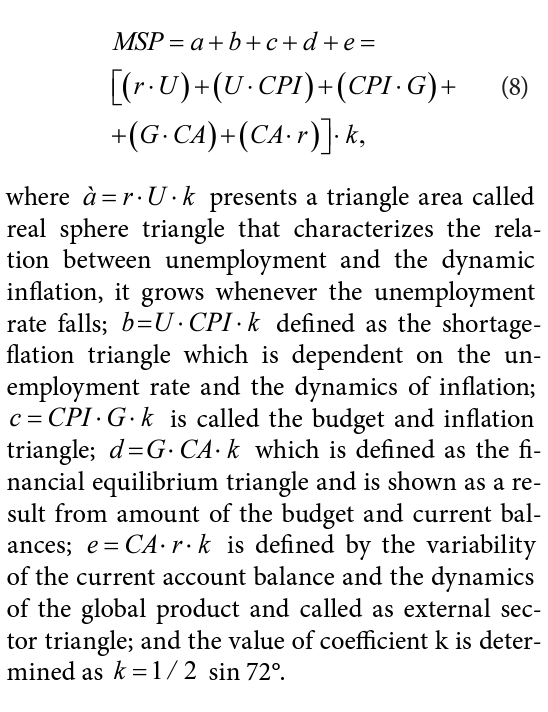 Lyulyov and Shvindina (2017) have used statistical data set for low and middle income countries between the period 2000-2015 to conduct a detailed analysis of macroeconomic stability based on MSP, MSP I and MSP2 indicators. 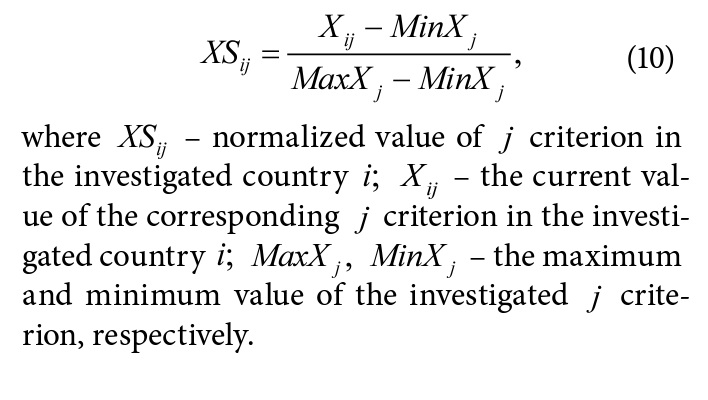 To apply the proposed method for assessing the impact of fiscal decentralization on macroeconomic stability, we have calculated the variables of macroeconomic stability (Table 1) as dependent variable of the regression equation (3), based on the collected and processed statistical date set from Ukraine (World Bank, 2017) covering the period from 2000 to 2015. 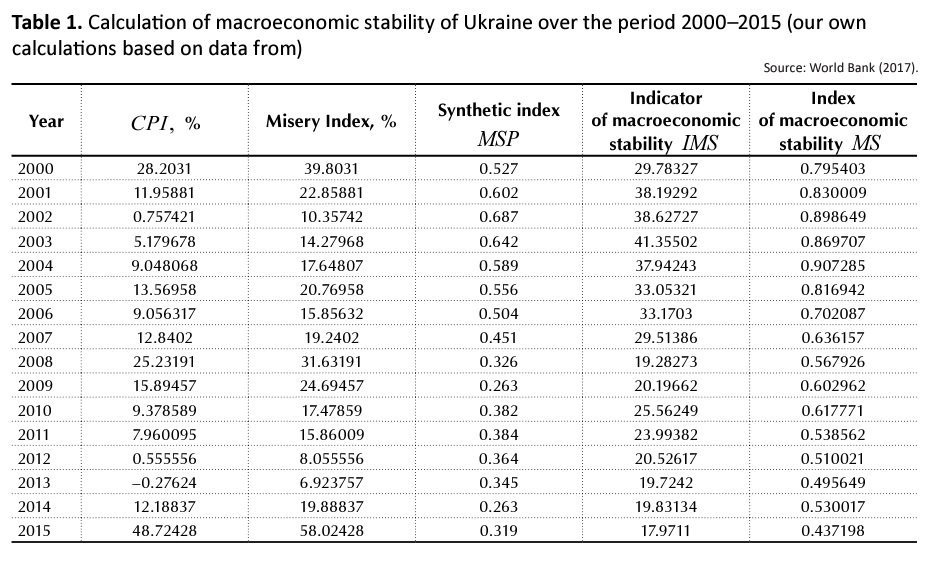 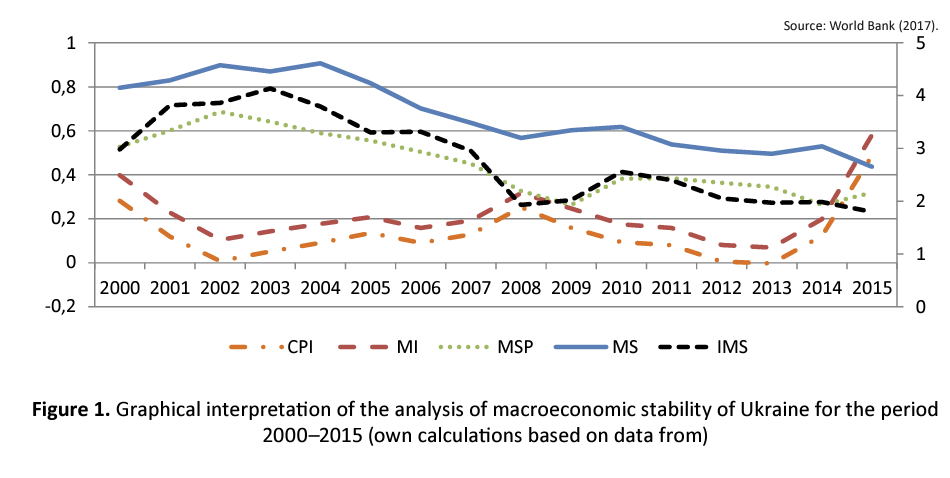 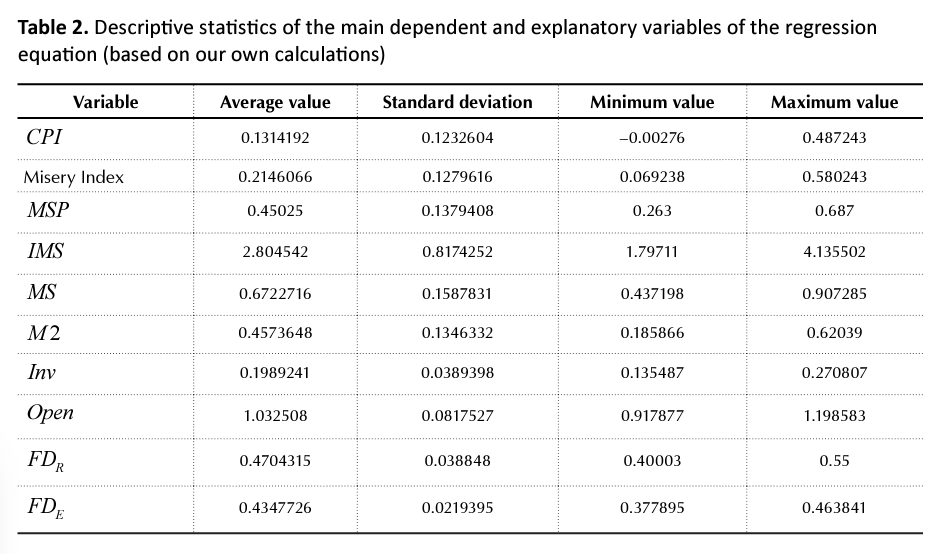 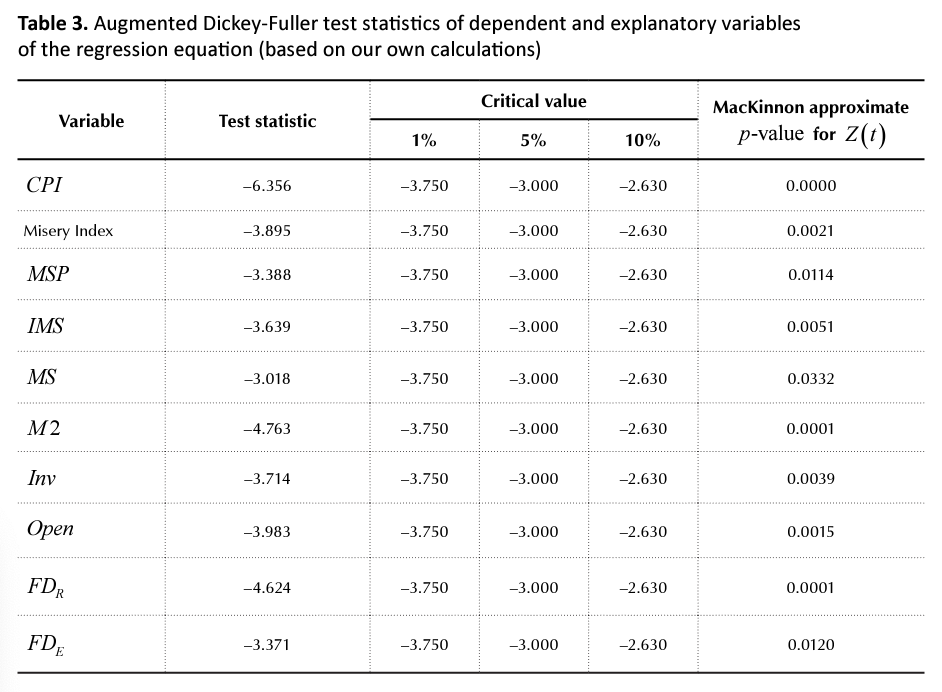 Table 2 presents data characteristics for the main explanatory factors of the regression equation (3) and their descriptive statistical characteristics.

The statistical analysis of the dependent and explanatory variables of the regression equation (3) using the Augmented Dickey-Fuller (ADF) test showed that the data in this series are non- stationary in this study; therefore, in order to obtain a correct explanation of the results, we will perform the procedure for finding the first statistical data differences. In this case, the data are expressed in logs, and the first differences are explained as growth rates and result in the stationarity of the series (Table 3).

The stationarity of data series allows using the OLS method (least squares) to set up the regression equations (4)-(6). Results are reported in Table 4. We emphasize that, if the indicator of macroeconomic stability of the country is an integral indicator that characterizes the main goals of macro- economic policy of the state: high rates of production development, full employment, slowdown in inflation, external payments balance, a stable exchange rate of the national currency, etc., the accuracy of the dependent variable assessment, which is explained by the dependence model, increases. In particular, R-squared value varies from 0.6614 to 0.7986 when using MSP, IMS and MS as an integral indicator of macroeconomic stabilization.

Empirical findings of the study indicate that the relationship between income decentralization and macroeconomic stability in Ukraine for the period 2000-2015 is negative and statistically significant. Such negative relationship is mainly caused by 2000-2014 Ukrainian model of formation and use of budget funds, based on centralization of financial resources in the State Budget of Ukraine and the mechanism of subsidies for local budgets (Valigura & Ambryk, 2016). The findings of the study indicate that decentralization reforms initiated in 2014 in Ukraine in compliance with the European Charter of Local Self-Government are aimed at implementing European integration vector for local and regional democracy development, and will ultimately lead to a stable macro environment. 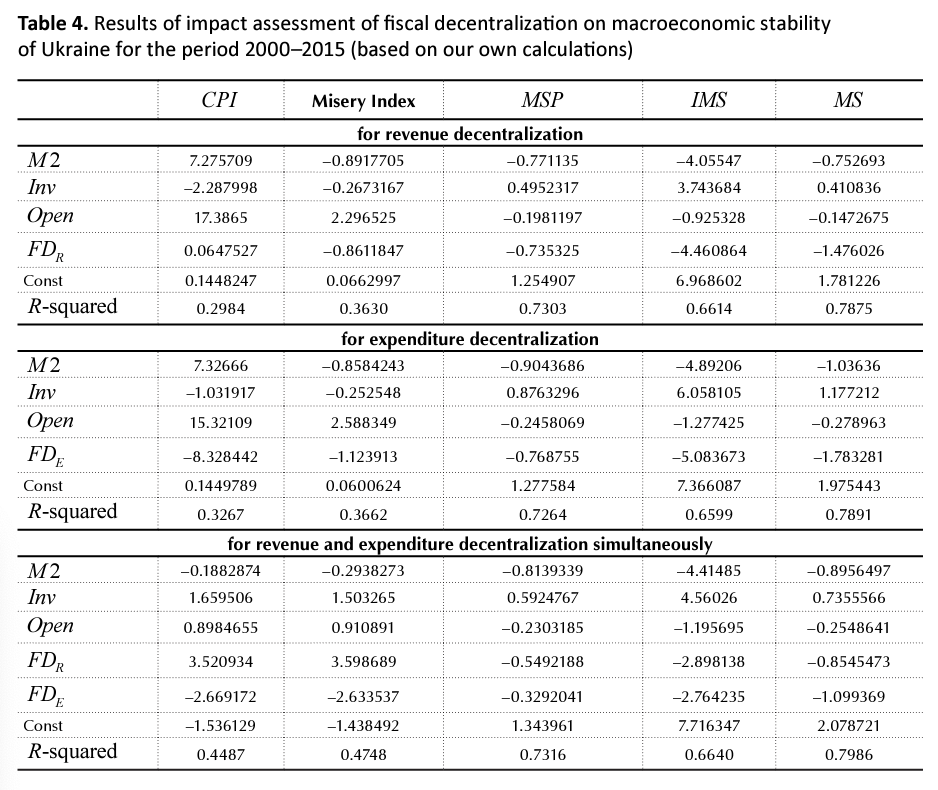