The costunolide biosynthesis enzymes of Artemisia glabella Kar. et Kir.: Determination of the nucleotide sequences of the mRNA

Artemisia glabella Kar. et Kir. is a source of sesquiterpene lactone arglabin, which has antitumor, radiosensitizing and immunomodulatory activity. Studying the biosynthesis of arglabin and its derivatives will allow us to develop the biotechnological basis for its production, thereby increasing its availability. The precursor to most sesquiterpene lactones is costunolide. The purpose of these studies was to detect and determine the nucleotide sequences of mRNA enzymes germacrene A synthase (GAS, EC 4.2.3.23), germacrene A oxidase (GAO, EC 1.14.14.95) and costunolide synthase (COS, EC 1.14.13.120), involved in the biosynthesis of costunolide in A. glabella. As a result of studies, mRNA was isolated from various forms (intact plant, regenerant plant, callus) of A. glabella. Using specific primers, mRNA fragments of genes encoding sesquiterpene lactones biosynthesis enzymes were amplified and their nucleotide sequences were determined. A comparative analysis of the obtained sequences showed their high (>90%) identity with the genes of GAS, GAO and COS of other representatives of the family Asteraceae. It was revealed that enzymes are expressed both in an intact plant and in calluses and regenerant plants obtained in vitro.

Sesquiterpenoids of the guaiane series belong to fairly widespread substances of the plant kingdom. A particularly large number of guaiane compounds are included in the group of sesquiterpene lactones called guaianolides. α-Methylene guaianolides have a bitter taste,  are  toxic,   and   exhibit   cytotoxic   and  antitumor properties. Their molecules, as a rule, are polyfunctional and many of them are characterized by the presence of exocyclic unsaturation (Fischer et al., 1979; Frederick, 1982).

Sesquiterpene lactones are derivatives of isopentenyl diphosphate (IPP), which can be synthesized in two

Sesquiterpene lactones are formed in the plant organism by oxidation of the methyl part of the isopropyl group attached to the main carbon skeleton. Cyclization of farnesyldiphosphate (1) gives (+)- germacrene A (2). Oxidation of the isopropenyl side chain by (+)- germacrene A-hydroxylase to primary alcohol and further oxidation by NAD (P)+- dependent dehydrogenases gives germacrene acid (3). This is followed by hydroxylation at the C-6 position and subsequent lactonization leads to (+)- costunolide (4). It is assumed that the second stage of the cyclization of germacranolides to the guaianolide skeleton proceeds through epoxidation or hydroxylation of the costunolide skeleton (Ma et al., 2019).

As a result of research on the homology of nucleotide sequences with known sesquiterpene monooxygenases, six promising cytochrome P450 contigs (actin, GAS, GAO, COS, parthenolide synthase and costunolide 3β-hydroxylase) were identified and selected for functional characterization. A new cytochrome P450, cauniolide synthase, which catalyzes the formation of guaianolide cauniolide (5) from the germacranolide substrate costunolide (4), has been characterized. Unlike most cytochromes P450s, cauniolide synthase has a unique mechanism of action, combining stereoselective hydroxylation of costunolide (4) at the C-3 position with elimination, cyclization, and regioselective deprotonation (Liu et al., 2018).

One of the promising guaianolides is arglabin (6), isolated for the first time from Artemisia glabella Kar. et Kir., an endemic species of wormwood (Artemisia L.), which grows exclusively in Central Kazakhstan. A. glabella is ? source of a number of biologically active compounds such as sesquiterpene lactones and essential oils (Adekenov et al., 1982; Adekenov et al., 1995). Arglabin (6) is the active substance of the anticancer drug “Arglabin”, which was developed at the International Research and Production Holding “Phytochemistry” and is produced on an industrial scale by the Karaganda Pharmaceutical Plant (Karaganda, Republic of Kazakhstan) (Adekenov, 2001, 2015).

Arglabin (6) is found in all organs of A. glabella and throughout the growing season (Adekenov et al., 1995). Its quantitative accumulation is observed during the budding period in leaves (1.90%) and buds (1.56%) (Mantler et al., 2020). However, the biosynthesis stages of the arglabin molecule in a plant organism at the genetic level are studied insufficiently. 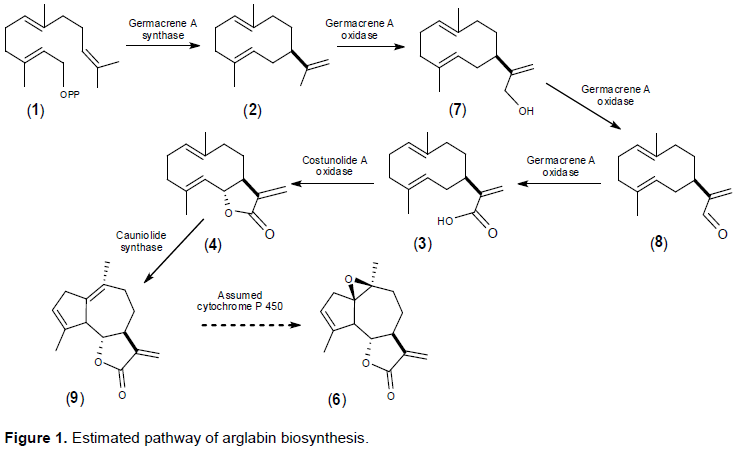 In previous studies, a number of genes encoding sesquiterpene enzymes that control key steps in secondary metabolic pathways have been characterized from a number of herbal plant species. However, the genes responsible for enzymatic processes in guaianolide biosynthesis have not been identified. Therefore, the isolation and characterization of genes involved in the biosynthesis of arglabin (6) in A. glabella is a promising direction of research for the reconstruction of the process in a heterologous system. The main objectives of this study were the isolation of genes encoding the GAS, GA? and C?S in A.glabella and the determination of the nucleotide sequences of mRNA, as well as the assessment of the expression of these genes at the level of transcription in regenerated plants and callus tissues.

The intact plant of A. glabella Kar. et Kir. in the budding phase under ex situ conditions, the regenerant plant and callus tissues obtained in vitro culture in the biotechnology laboratory of JSC “International Research and Production Holding “Phytochemistry” were used. Leaves and flower buds were collected and immediately frozen in liquid nitrogen and stored at -80°C (three biological replicates for each tissue were used).

For total RNA extraction, fresh or freezed plant material (about 100 mg) immediately transferred to 200 μl Tryzol  reagent  in  1.5 ml microcentrifuge tube. Cells were disrupted mechanically with a pestle in the presence of carborundum. After cell disruption, an additional 800 μl Tryzol reagent was added. All subsequent steps were carried out as described in the manual.

mRNA was isolated from total RNA using the Dynabeads® mRNA DIRECT™ Purification Kit (Invitrogen, USA) according to the manufacturer's protocol.

Amplification and sequencing of fragments of targeted genes

The evolutionary history was inferred using the Neighbor-Joining method (Saitou and Nei, 1987). The evolutionary distances were computed using the Poisson correction method (Zuckerkandl and Pauling, 1965) and are in the units of the number of amino acid substitutions per site. All positions containing gaps and missing data were eliminated. Evolutionary analyses were conducted in MEGA7 (Kumar et al., 2016).

The design of primers for amplification of target genes was carried out based on the analysis of the nucleotide and amino acid sequences of GAS, GAO and COS in members of the Asteraceae family presented in the GenBank of The National Center for Biotechnology Information, U.S. National Library of Medicine.

Conserved short peptides were identified based on the multiple alignments of the amino acid sequences of GAS, GAO, COS (Figure 2). These peptides became targets for the design of specific primers (Table 1).

In silico analysis revealed that putative AgGAS has about 40 to 90% homology at protein level with annotated germacrene A synthases. It has highest identity (90%) with Tanacetum parthenium germacrene synthase (TpGAS) and lowest identity (40%) with Solidago canadensis germacrene synthases (ScGAS) (Figure 4A). Neighbour joining algorithm generated phylogenetic tree has combined AgGAS, AaGAS and TpGAS into one evolutionary lineage (Figure 4B). Tanacetum and Artemisia are members of the taxonomic tribe Anthemideae.

Phylogenetic analysis of AgGAO and AgCOS showed high homology with the corresponding enzymes of T. parthenium, 97 and 95%, respectively (Figures 5A and 6A). Neighbour joining algorithm generated phylogenetic tree showed separate evolutionary lineage of AgGAO and AaGAO (Figure 5B). However, AgCOS was combined in one lineage with TpCOS (Figure 6B).

Thus, for the first time the nucleotide sequences of mRNA fragments encoding AgGAS, AgGAO and AgCOS were determined. A comparative analysis of the obtained sequences showed their high (> 90%) identity with the annotated GAS, GAO and COS of other members of the family Asteraceae.  It was found that AgGAS, AgGAO and AgCOS are expressed both in the intact plant, as well as in calluses and regenerated plants obtained in vitro.

The authors have not declared any conflict of interests.

This work was carried out according to grant project No. AP05134198 “The study of the biosynthesis of terpenoids in plants and the search for new pharmacologically active bimolecular compounds”, funded by the Science Committee of the Ministry of Education and Science of the Republic of Kazakhstan.