The use of traditional marketing tools by SMEs in an emerging economy: a South African perspective

MLA: Michael C. Cant, Johannes A. Wiid "The use of traditional marketing tools by SMEs in an emerging economy: a South African perspective" Problems and Perspectives in Management, vol. 14(1), 2016, p. 64 - 70

API: Michael C. Cant, Johannes A. Wiid (2016)."The use of traditional marketing tools by SMEs in an emerging economy: a South African perspective" Problems and Perspectives in Management, 14(1), p. 64 - 70

Small and medium enterprises (SMEs) play a vital role in all economies around the world, they are responsible for creating of jobs, alleviating of poverty, contributing to innovation and to the gross domestic product of a country. However, many of these businesses face challenges and often fail within a short period of time. The success of small businesses is not only having products and a market to sell them to but also effective marketing of these products to the targeted market. A vast array of studies have investigated SME marketing tool usage however few have looked to SMEs in emerging economies and specifically to the traditional marketing tools such firms employ. Therefore the focus of this study was to describe the usage of traditional marketing tools employed by SMEs from a South African perspective. This study followed a quantitative research methodology whereby a self-administered questionnaire was distributed to SME owners within the Gauteng province of South Africa. Results obtained from this research indicate that SME owners mostly make use of print media while broadcast media is used selectively. Results obtained within this study will be of value universally to SME owners as it can be seen that all SMEs irrespective of geographic location face similar challenges

1.1. Traditional marketing. Marketing plays an important part in any organization large or small, as without it producers and consumers would not be able to find one another (Salehi, Mirzaei, Aghaei & Abyari, 2012, p. 385), more specifically, through marketing, businesses achieve success by determining and satisfying the aspirations, needs and wants of their targeted consumers (Walsh & Lipinski, 2009, p. 569). The American Marketing Michael C. Cant, D.Com. in Business Management with specialization in Marketing and Retail Management, Professor, Department of Marketing and Retail Management, University of South Africa, South Africa.

While new forms of marketing communication are emerging in the 21st century such as e-marketing, many businesses still make use of traditional marketing tools to promote their merchandize, and especially small businesses, due to their limited marketing budgets (Marketing-schools.org, 2012).

1.2. SMEs and its contribution to the South African economy. There is no generally accepted definition of an SME. Although it can be described
as an independent organization that employs less than a given number of employees, the definition of an SME by size however varies among researchers (Abor & Quartey, 2010, p. 219); for the purpose of this research SMEs will be considered to have between 1-150 employees.

SMEs play a significant role in the economies of many countries throughout the world (Olawale & Garwe, 2010, p. 729). They are often described as “efficient and prolific job creators, the seeds of big businesses and the fuel of national economic engines” (Abor & Quartey, 2010, p. 218). SMEs account for about 91% of formal businesses in South Africa, contributing between 51-57% of the country’s gross domestic product (GDP) and providing approximately 60% of employment (Kongolo, 2010, p. 2288; Abor & Quartey, 2010, p. 219). Due to their potential for job creation, innovation, stimulation of economic expansion and the alleviation of poverty in developing countries (Kongolo, 2010, p. 2288; Dlodlo & Dhurup, 2010, p. 164), governments worldwide have focused on small business development in order to promote economic growth (Olawale & Garwe, 2010, p. 729).

Despite the evidence that SMEs play a vital role in the economy and their notable contributions, it appears that South African SMEs have some of the highest failure rates in the world with approximately 75% of new SMEs not blooming into established organizations (Olawale & Garwe, 2010, p. 730). According to Van Scheers (2011, p. 5048), 40% of new SMEs fail within their first year, 60% within their second year, and 90% within their first 10 years of operation. Such high failure rates may be due to a number of factors including management skills, finance, access to markets and appropriate technology (Kongolo, 2010, p. 2293) and as mentioned previously, this may further influence SMEs in their decision to invest in online marketing or remain in the sphere of traditional marketing.

1.3. SME usage of traditional marketing tools. Marketing is vital for the growth of any business, as without it a business could offer the best products on the market but nobody would know of its existence (Hawes in: fin24, 2013). Ralph Waldo Emerson often cited for saying “Build a better mousetrap and the world will beat a path to your door”, is a fallacy in marketing as having a good product is only one aspect in getting your product in the hands of consumers (Critchfield, 2010). In response to this theory Emerson O.B. Winters responds to say that even if you have a good mousetrap (product) you need to show this mousetrap to the world in order to fully succeed (Pritchett, 2011). While the importance of the marketing concept applies to all organizations, it is well documented within literature that large organizations’ marketing efforts differ substantially from that of SMEs (Gilmore, Carson & Grant, 2001, p. 6; & Reijonen, 2010, p. 279).

SME marketing efforts are hindered by various aspects such as the size of the business, lack of marketing knowledge, poor cash flow or small budget and tactical and strategic customer-related problems (O’Dwyer, Gilmore & Carson, 2009, p. 46). However, despite various hindrances SMEs face in implemented marketing activities, the business activity remains essential to the success of the business. It therefore becomes important that the marketing activities that contribute strongly to a SMEs performance be identified (Walsh & Lipinski, 2009, p. 570).

Although traditional marketing tools work for some, many marketers believe that this strategy is ineffective. For example, in a survey regarding businesses opinions on lead quality and quantity by channel, only 4% of respondents indicated that leads generated from print, radio and TV ads were high quality and only 9% indicated that this channel delivered a high quantity of leads (Ross, 2013). 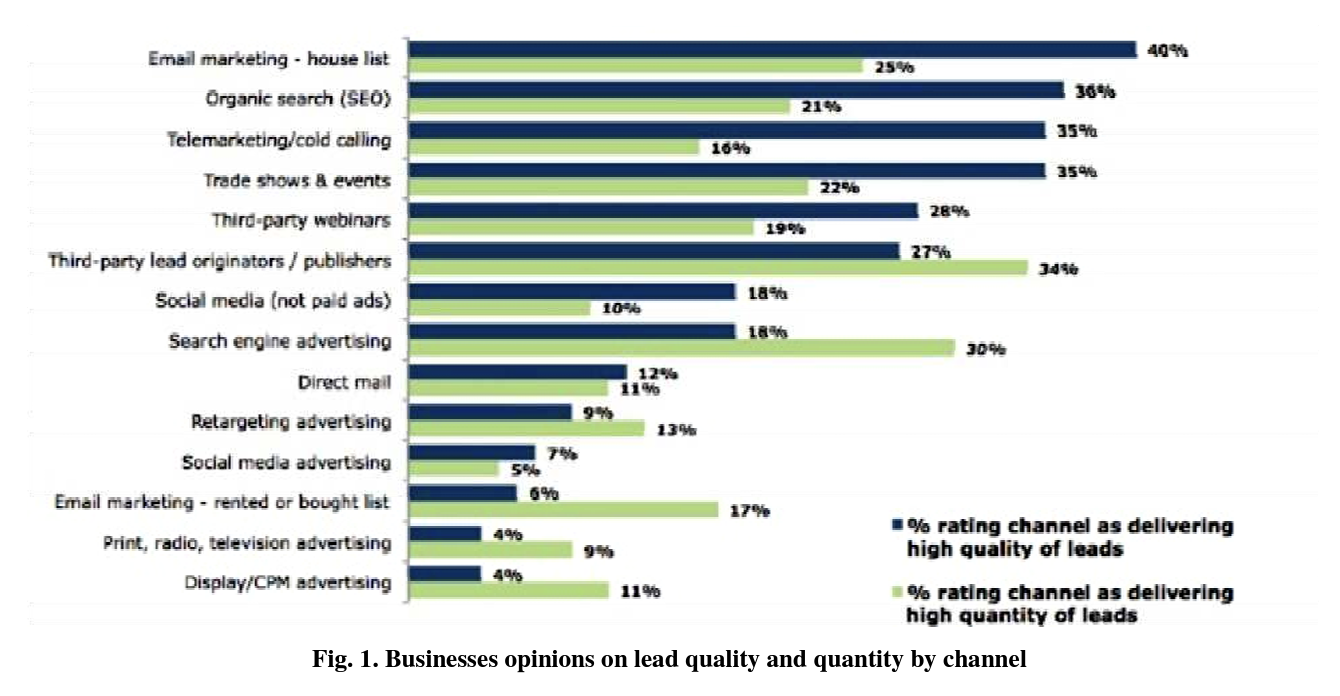 Sledzik (2014) further states that traditional marketing tools leave many dissatisfied, with a number of SMEs least satisfied with advertising in magazines, newspapers and the yellow page listings. In addition, traditional marketing tools are expensive which in turn affects SMEs in their decision to invest in television and radio advertising, billboards, newspapers and yellow pages listings.

The purpose of this research study was to describe the usage of traditional marketing tools employed by Small Medium Enterprises (SMEs) in the emerging economy of South Africa.

The way in which data were collected for this study was through the distribution of a self-administered questionnaire to SME owners that reside within the Gauteng province of South Africa and whose businesses (SMEs) are registered at an official state institution. A non-probability, convenience sampling methodology was employed by the researchers as it allowed for quick and easy collection of data. The questionnaire was composed of questions that were quantitative in nature which therefore allowed business owners to indicate their usage of traditional marketing tools. An acceptable number of questionnaires were distributed to obtain a confidence level of 95% and an error margin of 10% at 50% response distribution was achieved. 71 useful responses were received which contains an error margin of 11.38%.

The low number of responses only give a general indication of the usage and effectiveness of traditional marketing tools in South African SMEs and the findings cannot be inferred to all SMEs, further research is needed.

The data obtained were checked, coded and corrected, where after it was analyzed using the software program IBM SPSS Statistics V22. Descriptive statistics in the form of frequency counts was used to describe the findings. Descriptive statistics were used to describe which traditional marketing tools had previously been used, how often and how effective the SME owners found the particular traditional marketing tool to be.

Findings obtained in this study take into consideration the respondents’ composition in terms of employee numbers, frequency of marketing plan updates and the monthly amount that SME owners spend on traditional marketing tools. 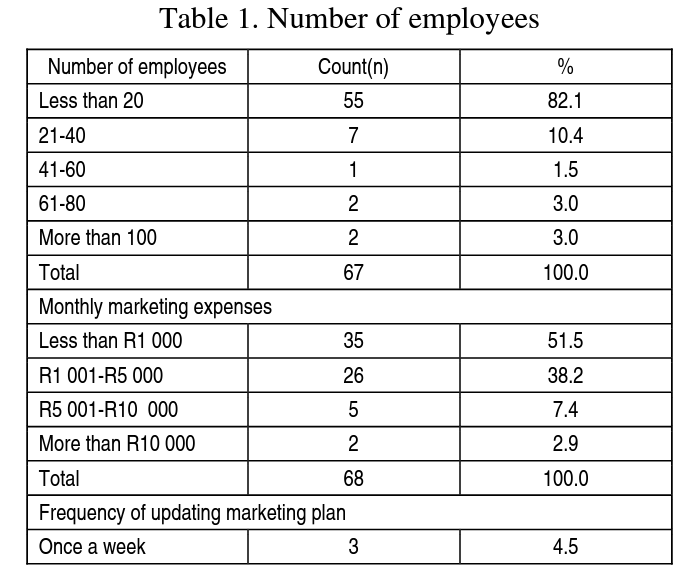 Respondents were next asked about their usage of traditional marketing tools in the past. The following section shall now discuss the results obtained. Once past usage had been determined, SME owners were asked to indicate the frequency for which they use stated traditional marketing tools.

From the descriptive statistics obtained for the question pertaining to the frequency of use of the different traditional marketing tools, it is evident that the frequencies are non-normally distributed (see Table 2 below):

Due to the exploratory nature of the study descriptive statistics were used to analyze the data. Responses were grouped into three ratings on the Likert scale due to the sample size, the two lowest frequency scales were grouped into one “Not at all & rarely” and the two highest frequency scales “Often & always”. From the results obtained it can be seen that 73.9% and 52.4% of the respondents make use of business cards and pamphlets either often & always while the remaining traditional tools were never used by more than 50% of respondents (Figure 3). Treating the variable as continuous, and keeping in mind that higher values correspond with higher levels of agreement with a statement, one can see from the means that the two most frequently used traditional marketing tools are business cards (Mean = 4.0) and pamphlets (Mean = 3.0) (see Figure 4 below). All of the traditional marketing tools are rated as either “Effective or very effective” by most of the respondents (more than 50%), except magazines (44.9%). The top three tools rated in terms of efficiency “Effective or very effective” are business cards (70.8%), radios (57.6%) and pamphlets (57.1%) (see Figure 5 below). The bottom four rated traditional media tools as posters and television (53.7%), billboards (52.8%) and magazines (44.9%). Treating the variable as continuous, and keeping in mind that higher values correspond with higher ratings of effectiveness, one can see that the three most effective marketing tools are perceived as business cards (mean = 4.1), pamphlets (mean = 3.6) and posters (mean = 3.6) (see Figure 6 below). This is followed by the rest of the traditional marketing tools rated with an average above 3, which is the middle value of the scale (from 1 to 5).

The following section shall now discuss the conclusions and recommendations that emanate from the findings discussed above.