The era of empire or globalization? The impact of the global shift on development thinking and society

The model of education for forming the culture of tolerance in future specialists in the university environment was developed and implemented after receiving the data of the ascertaining experiment, confirming the necessity of formation of the culture of tolerance in educational activities. The model suggests a focused and systematic work on formation of the culture of tolerance in higher school (Verbitskaya, 2010: 160-163).
We used the methodological principles of systematic, activity, polysubject and culturological approaches, and the modeling theory; we studied the modeling of the educational process, as well as the peculiarities of interaction of the mentor and the students’ group.
Modeling is a process mediated cognition and transformation of reality, in which the object of study – the original – is in specific accordance with another object model (Solomatin, Gam, 2001).
The model is a tool of knowledge, a means of interpreting and explaining the phenomena of reality. It is natural that modern technology of making optimal managerial decisions in complex, non-deterministic situations is implemented primarily through the application of economic-mathematical methods and models, allowing you to process incoming information according to the model quickly and accurately (Ostapenko, 2005).
The model of formation of the culture of tolerance in future specialists can be defined as a structural-dynamic model. It includes the structure of the main components of formation of the culture of tolerance in educational activities at the university, the relationship of these components, the dynamics of their development and the conditions for their effective functioning.
Making model, we used the methodological principles and regulations of the systematic approach. The systematic approach as a methodological approach is seen as an essential tool in the implementation of educational activities. The systematic approach is based on the creation of structural and functional models that imitate the learning and studying processes as systems revealing the laws and principles of their organization and functioning in the future. Using the results of the research of such scientists as V.G. Afanasiev (1981), I.F. Isaev (1997), B. F. Lomov (2011), Y.P. Sokolnikov (1986), etc., who studied the pedagogical phenomena as systems, it can be concluded that the formation of the culture of tolerance in the university environment is a pedagogical system or integrity (Slastenin, Isaev, Shiyanov, 2007: 83).
In the process of developing the model of education, creating the culture of tolerance in future specialists in the higher education sphere, the activity approach was used. A.N. Leontiev revealed the significance of the activity approach in his works (Leont'ev, 1977:102).
As A.N. Leontiev stressed, a goal is important for any kind of activity, including the pedagogical one. A.S. Makarenko believed that the program of development of personality and its characteristics is the aim of the activities of the teacher, and he supported the idea of the designing of personality in pedagogy (Slastenin, Isaev, Shiyanov, 2007:18-19). In addition, in our study we also took into account a polysubject (dialogical) approach. A.A. Ukhtomsky and M.M. Bakhtin noted the uniqueness of the human person. In their works they noted that the personality of the person can be revealed only in dialogical communication (Slastenin, Isaev, Shiyanov, 2007: 88-89).
Both activity and personal approaches, and dialogical (polysubject) approach, form the basis of the methodology of humanistic pedagogy.
The ascertaining experiment has allowed us to determine the forms of educational work, developing the culture of tolerance, selected from many others by students and mentors of students’ groups. One of such forms is the organization of meetings with foreign students, representatives of different nationalities of the Russian Federation. This form enriches the experience of tolerant communication of future specialists and creates the tolerance-oriented educational environment. In addition, the following forms of educational work contribute to the creation of the tolerant-oriented educational environment at the University, where the future specialist can acquire the experience of tolerant interaction and communication: cooperation and partnership of the mentor and students; meetings with famous scientists of different nationalities, studying the biographies of teachers and graduates of different nationalities; organizing of Christmas balls (Christmas) and Easter with foreigners; the involvement of foreign lecturers.
The culturological approach is also important in the context of our research. This approach involves the construction of educational process on human values, on the norms and values of ethnic and national traditions and cultures. Mentors working on the development of the culture of tolerance in supervised groups should consider and apply this principle. The culturological approach means the organization of the educational process where the personality is studied, and the formation of personal value orientations is observed (Isaev, Sitnikova, 1999; Nikireev, 2004). The value orientations of the individual represent elements of moral consciousness, its basic ideas and concepts, expressing the essence of the moral meaning of human existence.

The composition and structure of the main components involved in the development of the culture of tolerance in educational activities were determined during the analysis of objects and the relationship of these components within the system. The conditions of their functioning were revealed (see Fig.1).
The purpose-oriented block of the developed model includes the analysis of requirements to a modern specialist required by the society at this stage, that means respectively the development of educational goals. 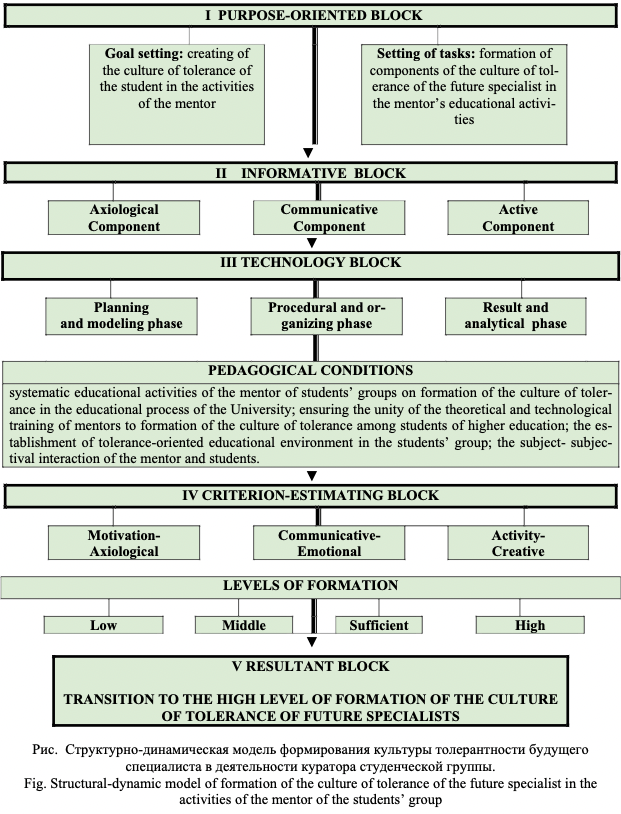 Thus, the model for formation of the culture of tolerance of the future specialist in the activities of the mentor of the students’ group is presented with the purpose-oriented, informative, technology, criterion-estimating and resultant blocks.

The era of empire or globalization? The impact of the global shift on development thinking and society